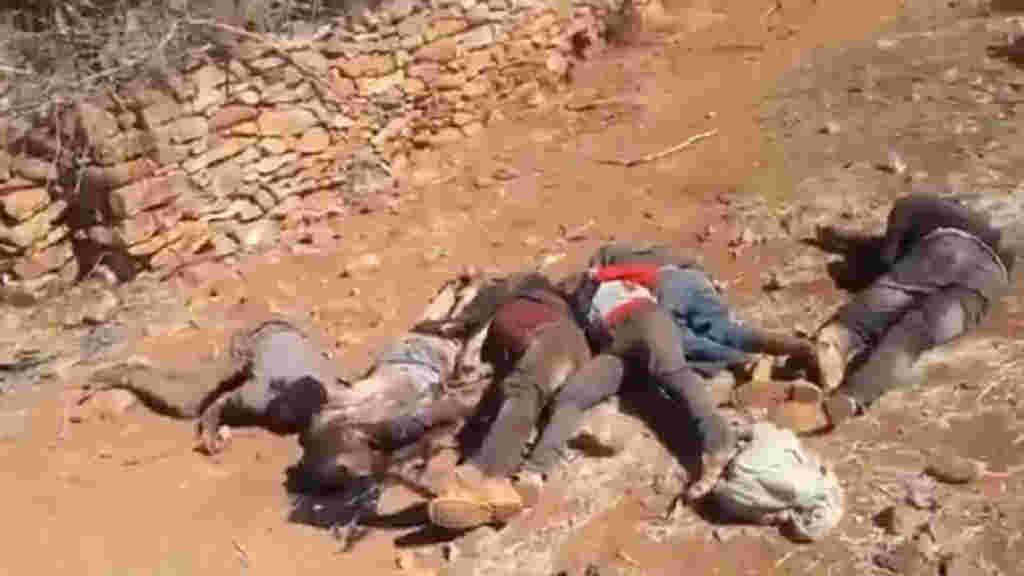 In early January 2021, Ethiopian soldiers carried out a mass extrajudicial killing in a village near the Christian monastery of Debre Abay in Tigray.

Yesterday, the Telegraph reported about a leaked video, a four minute clip, of the massacre at Debre Abay by Ethiopian soldiers. In the clip, as Ethiopian soldiers walk among the dead and dying bodies of unarmed Tigrayan villagers, the cameraman, presumably a soldier, says to his fellow soldier in Amharic, “You should have finished off the survivors” (ref. 1).

What’s to be said about this?

For a start, this constitutes evidence that the Ethiopian army is committing war crimes. Executing non-combatants is against the Geneva Conventions.

But more importantly, it must be said, the video obtained by the Telegraph is not the only one. Apparently, Tigrayan media and supporters of Tigray on social media have previously published other videos of the same atrocity.

Most of these videos have been filmed by Ethiopian soldiers, and then leaked. The question to ask is, why? It is as if Abiy Ahmed Ali does not care about the Geneva Conventions. Nor does he care about being implicated in war crimes.

Let me suggest, these are acts of terrorism! What is terrorism if not the unlawful use of violence and intimidation, especially against civilians, in the pursuit of political aims. As I see it, Abiy Ahmed Ali is trying to terrorise the TPLF into capitulating.

A few days ago, a Kenyan paper reported that the TPLF is still very much in the fight (ref. 2). Their latest military operations in Juwamare and Adi-Chilo killed a total of 502 soldiers of the federal government and Eritrea, and what is more the same operations resulted in the capture of vehicles, weapons and ammunition.

Yesterday, the latest from Reuters is that the TPLF has offered to commence peace talks with the government of Abiy Ahmed Ali (ref. 3). The TPLF has laid out eight conditions for the commencement of peace talks, notably the appointment of an international mediator and unimpeded access for humanitarian aid to Tigray.

Clearly, the TPLF is trying to alleviate the plight of their people, including the threat of mass starvation, the widespread rape of defenceless women, and the extrajudicial killing of unarmed civilians. While the TPLF remains intact as a combat force, perhaps the terrorist tactics of Abiy Ahmed Ali are starting to affect its resolve. You can see here that one side is good and noble; and the other is profoundly evil, cruel, immoral and unlawful in every way.

So far the government of Abiy Ahmed Ali has not responded to this gesture of peace from the TPLF. But if it does, I would worry if the international mediator is the USA, or the UK or any of the Five Eyes, because these would quickly betray to the Islamists any crucial military information about the TPLF.

… he [the Assyrian] shall return, and have intelligence with them that forsake the holy covenant.

Certainly, it must not be Turkey, who has already volunteered to mediate between Ethiopia and North Sudan (ref. 4). As I say, Turkey is for sure one of the heads of the beast with seven heads and ten horns, and so is Ethiopia led by the current Oromo PM.

Let me now explain the military situation from the standpoint of Bible prophecy, and thus how it will play out.

More recently, Egypt has entered the fray on the side of North Sudan (ref. 5). There is talk that Egypt has drawn a red line, as it did over Sirte Libya (ref. 6): Egypt has set an ultimatum, as it were, to Turkey not to side with Ethiopia, against North Sudan.

I should mention, Egypt and North Sudan and Ethiopia are also embroiled in a dispute over the Renaissance Dam, which is prophetic (ref. Isaiah 19:6). But concerning Isaiah 19:6, the situation is currently in reverse. When the time comes for Isaiah 19:6 to be fulfilled, Egypt will be Islamic and Ethiopia will be non-Islamic.

Right now, Egypt is led by Al-Sisi, who is fighting ISIS, which explains why his name is the literal reverse of ISIS.

A war between Egypt and North Sudan on one side and Ethiopia and Turkey on the other will lead Ethiopia, which is Cush, to the border of Israel (ref. Daniel 11:43).

Militarily, Egypt is arguably the strongest in Africa. Yet Egypt will not be able to withstand the beast with seven heads and ten horns.

He [the Assyrian] shall enter also into the glorious land, and many countries shall be overthrown… He shall stretch forth his hand also upon the countries: and the land of Egypt shall not escape.

And the Egyptians will I give over into the hand of a cruel lord; and a fierce king shall rule over them, saith the Lord, the LORD of hosts.

When Egypt falls to the beast, prophetically the Nile will be turned far away.

And the waters shall fail from the sea, and the river shall be wasted and dried up. And they shall turn the rivers far away; and the brooks of the defence shall be emptied and dried up: the reeds and flags shall wither.

What does this mean? This means, a force that opposes the Antichrist will take control of Ethiopia, especially the area around the Renaissance Dam. Who else can this be if not the Tigray People’s Liberation Front?

I should also mention now that after Egypt falls to Islamists, it will be the Israel Defence Force based in the modern-day stronghold of the Negev, which is Judah, that will recover Egypt.

This will be possible because something else will happen that will lift the siege against Judah (ref. Zechariah 12:2). The siege of the beast with seven heads and ten horns will be lifted when the kings of the east enter the arena!

… I will make you a name and a praise among all people of the earth, when I turn back your captivity before your eyes, saith the LORD.

At that time, the archangel Michael will also battle for Israel.

Around then, the TPLF will do something for the LORD of hosts! This is why the name of the leader of the TPLF is Debretsion Gebremichael, which literally means “Mount Zion” and “Servant of the archangel Michael”.

Thus, in due time, Tigray will prevail.

1. Zecharias Zelalem (19 February 2021), “‘You should have finished off the survivors’: Ethiopian army implicated in brutal war crime video”, telegraph.co.uk