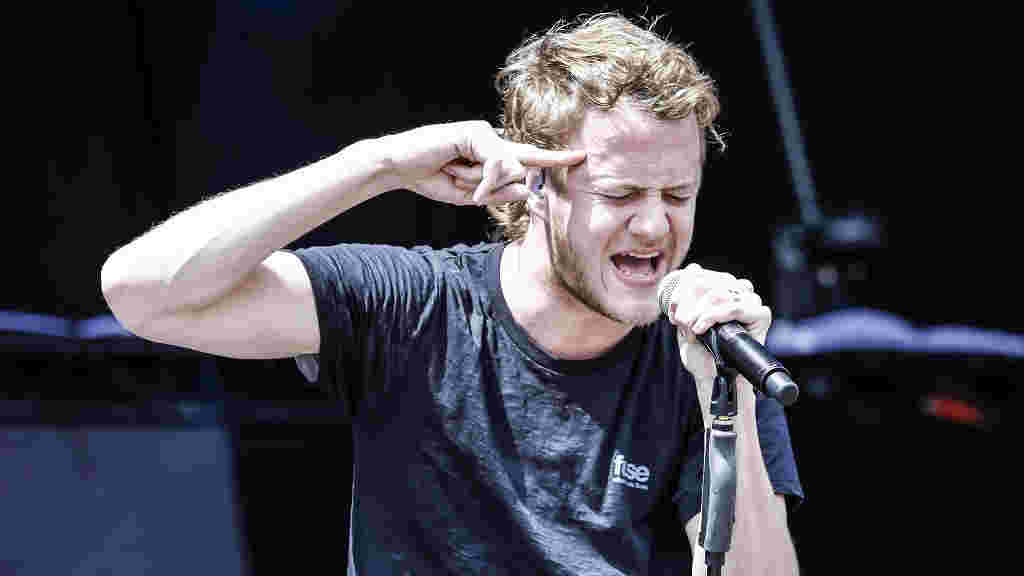 Demons and Radioactive and Believer by Imagine Dragons are no doubt inspired works of art.

The lead singer and song-writer of Imagine Dragons, Dan Reynolds, is a Mormon, a member of America’s church of the Latter Day Saints.

The Mormons are a heretical sect founded by Joseph Smith, a Freemason and self-declared prophet, whose “Book of Mormon” claims to add to the gospel of Jesus Christ, in spite of Galatians 1:6-9. A Mormon church, being heretical, would have a ministering angel that is against God.

Dan Reynolds is also a supporter of the LGBTQ movement, despite being married and having children.

Around 2010, Dan Reynolds formed his band and called it “Imagine Dragons”.

And the great dragon was cast out, that old serpent, called the Devil, and Satan, which deceiveth the whole world: he was cast out into the earth, and his angels were cast out with him.

In 2012, Imagine Dragons released their debut album, which they titled “Night Visions”.

After this I saw in the night visions, and behold a fourth beast, dreadful and terrible, and strong exceedingly; and it had great iron teeth: it devoured and brake in pieces, and stamped the residue with the feet of it: and it was diverse from all the beasts that were before it; and it had ten horns.

In 2013, MTV and Billboard named Imagine Dragons the biggest breakout band of the year. Their two biggest hits at the time were the songs “Demons” and “Radioactive”.

Before I explain the lyrics, I should now point out that in November 2020 Dan Reynolds admitted to having used heroin (ref. 1). Heroin is an opioid.

As a matter of fact, drugs especially marijuana, opioids, methamphetamine, anti-psychotics, and even anti-depressants can enable a demon to mess around with a person’s mind, or simply communicate with or inspire that person.

Information about the link between marijuana and demons was provided to humanity long ago. It is embedded in the Chinese character 魔 magic, which comprises of 麻 hemp and 鬼 devil.

In the Bible, “sorcery” in the original Greek is “pharmakeia” (ref. Revelation 18:23), from which the word pharmaceuticals is derived.

… for by thy sorceries were all nations deceived.

In recent years especially, there have been numerous cases of users of these drugs receiving hallucinations, hearing voices in their head, and behaving unnaturally, even beastly. This data can be gathered and analysed statistically to reveal a correlation and causation. Such a study would constitute scientific proof of a link between drugs and demons!

But don’t just listen to me. Listen now to what the demons themselves have said about this.

You might wonder, why would the enemy admit to such a thing? I suppose, they have been so successful in this thing that they have been doing that some of them have decided to gloat about it – to boast of their accomplishment.

The ancient Greeks called them “daemons” or “genies”. The latter explains the word genius. Artists are often inspired by these spirits: everyone from song-writers to authors of novels. After all, ministering angels are supposed to be able to put thoughts into a person’s head.

Let me now show you what I mean through the lyrics of three songs of Imagine Dragons.

The 2012 song Demons by Imagine Dragons is literally and clearly about demons that possess a man that has sold his soul out of “greed”. The refrain of this song sings “This is my kingdom come”, a satanic version of the LORD’s prayer “Thy kingdom come”. This is a statement and an admission that Mystery Babylon, that is to say the USA, is Satan’s kingdom (ref. Revelation 17:11). There is even a line in the song that sings “I am hell bound”. Here, the man “with the beast inside” appears to be acknowledging that he is damned, and is trying to warn his girlfriend, or the like, of his “fate”.

The 2012 song Radioactive is more telling. This song admits the fate of Mystery Babylon, also known as the beast of the earth with two horns like a lamb (ref. Revelation 18:8-10). The lyrics speak of a nuclear war, radiation, defeat, and a bus to prison. Furthermore, the army that carries a “red” flag wins the war. And the Son of man who wears a garment that is red, “a vesture dipped in blood” (ref. Revelation 19:13), wins the war. Further yet, the “sun hasn’t died”, as many Christians had presumed it would. It is not yet the time for the new Jerusalem from heaven. Still, the world has come to an end, because this is the dawn of a “new age”. “This is it, the apocalypse!”

The 2017 song Believer is where the demons brazenly rub it in. “First things first I’ma say all the words inside my head.” “My life, my love, my drive, it came from… Pain! You made me, you made me, a believer.” “Pain! You break me down, you build me up, a believer.” What do these lyrics mean? What is this song about? Pain-killers, specifically opioids! Heroin, which Dan Reynolds has admitted to taking (ref. 1), is made from morphine, which is taken from opium poppies.

You see, the demons don’t care anymore whether anyone knows about it or not. The time is almost up. They are simply having fun gloating.

On demons and music, the anointed cherub of Tyrus in Ezekiel 28 was created with “tabrets” and “pipes” (ref. Ezekiel 28:13-14). This explains why music is a forte for some of them.

Many artists seek out these spirits to obtain original, catchy material. This is a Faustian bargain!

Sure, it might be that Dan Reynolds does not know that demons are speaking through him – it might be that he has made no such bargain. Maybe, he is merely under their influence, receiving inspiration from them.

I found in one interview, the singer and song-writer said that he had suffered severe depression when he was young (ref. 7). At that time, despite the advice of a therapist, he made an effort not to take anti-depressants. So, the demons did not get to him that way.

But then at some point – and this is something he has admitted publicly (ref. 1) – he started to use heroin. Heroin is an opioid drug akin to a morphine-based pain-killer.

At that moment, it was as if the demons stood up and said aloud, score!

Subsequently, they celebrated the moment in song, performing a victory dance: “Pain! You made me a, you made me a believer, believer”

You see, for now, this is the contest.

This is the game. And remember it is a team game. To carry the metaphor further: one can play this game and try to win, or one can be played.