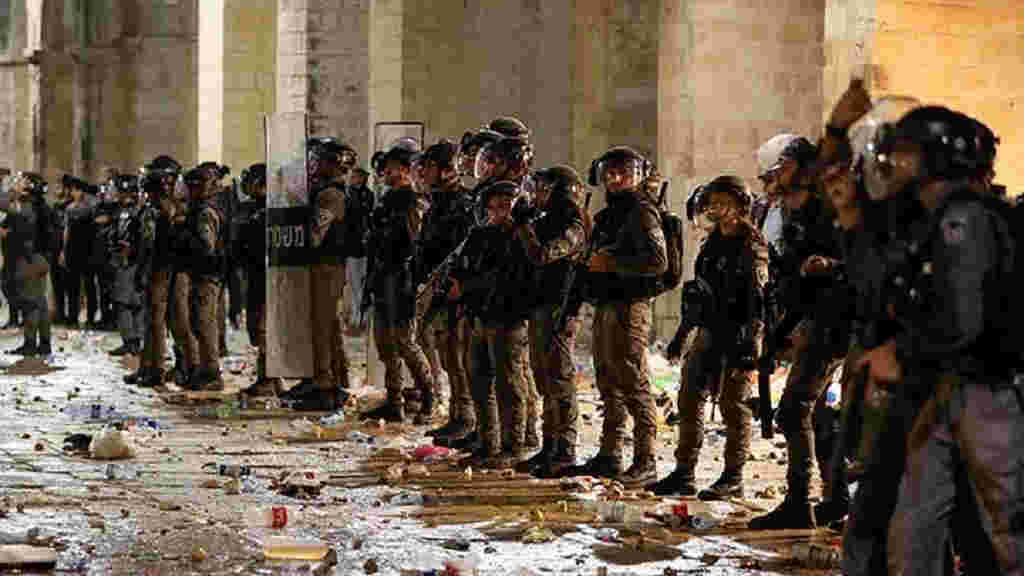 Violent riots continued for a second night throughout Jerusalem and the West Bank, fuelled by tensions over evictions in Sheikh Jarrah, east Jerusalem (ref. 1).

Yesterday, over 90000 Muslims went to Al-Aqsa mosque to mark Laylat al-Qadr (ref. 2), Arabic for “Night of Power”, which commemorates the night on which the Quran was first revealed to Islam’s Prophet Mohammed.

As the unrest went on, rockets were fired from Gaza, and the IDF retaliated. Then, reportedly, Israel called for a de-escalation via Egyptian mediators but Hamas rejected it (ref. 4).

In the West Bank, three Palestinian gunmen opened fire on Israeli Border Police. Two of the gunmen were killed in the ensuing firefight (ref. 4).

Now, Fatah has warned of an “all-out conflict in all the Palestinian territories” (ref. 5), a new intifada, as it were.

The USA, the EU and Russia are calling for all sides to calm down.

Muslim nations worldwide have voiced support for the Palestinians, including the UAE and Bahrain – the nations of the so-called Abraham Accords.

Turkey has even labelled Israel a “terror state” (ref. 6).

All this is a glimpse of what is to come. The Bible prophesies that the great tribulation for Israel will be a time of war. During that time, Israel will be attacked and besieged by several armies (ref. Zechariah 12:2-3).

For some parts of the world like Tigray, Ethiopia, there is already war and tribulation.

As you can see, this next world war will be a religious war. The war will be fought by human armies, by angels and demons, and by God himself.

Regarding Mystery Babylon, at first the beast with seven heads and ten horns will hate her, and burn her with fire (ref. Revelation 17:16-18), but eventually she will make peace with the beast (ref. Daniel 8:25), and thus openly side with it (ref. Revelation 13:11-18).

And I saw the woman drunken with the blood of the saints [Jews], and with the blood of the martyrs of Jesus [Christians]: and when I saw her, I wondered with great admiration. And the angel said unto me, Wherefore didst thou marvel? I will tell thee the mystery of the woman, and of the beast that carrieth her, which hath seven heads and ten horns.

So, ultimately, by the day of the LORD, there will be two sides in this world war. On one side will be Israel; on the other, Islam.

If you stand against Israel, then you are against the God of Abraham, Isaac and Jacob (ref. Romans 11). What is more, if you stand with Islam, that means you are against Jesus Christ (ref. 1 John 2:22-23). In other words, you are antichrist. Islam is antichrist because all Muslims adhere to the lie that Jesus is neither the Christ nor the Son of God.

So, in this religious war, one side will be for Christ, and the other will be for Antichrist.