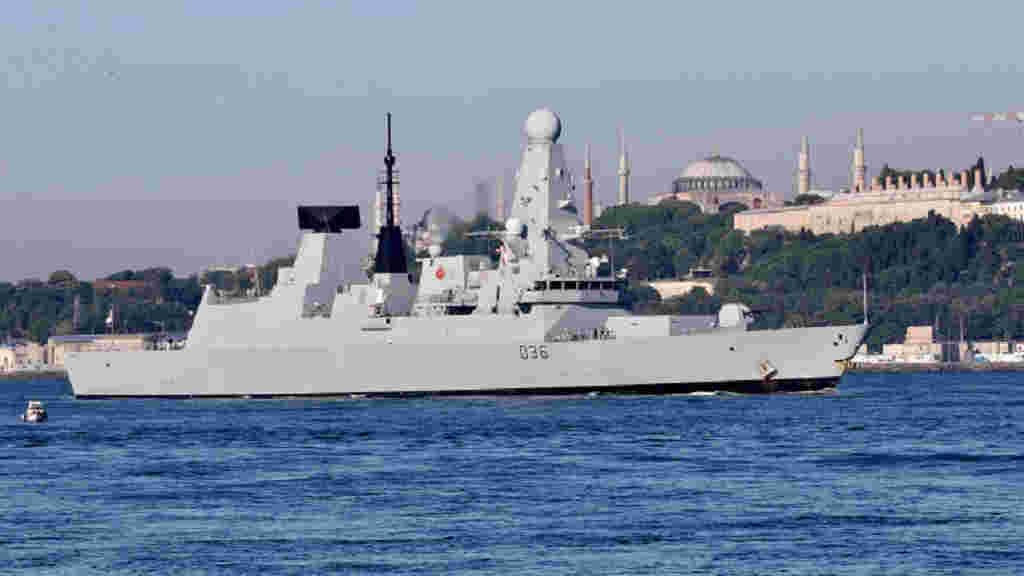 During what the Americans call a “Freedom of Navigation Operation” near Crimea, the UK’s HMS Defender, a Daring class destroyer armed with anti-air, anti-ship and anti-submarine weapons, was confronted by twenty Russian aircraft and a border patrol ship. Several of those jets buzzed the British warship and one warned, “If you don’t change course I’ll open fire” (ref. 1).

It is said, a Russian Su-24M dropped four bombs in front of the British destroyer, and the Russian patrol boat also fired warning shots (ref. 1).

Presumably, shortly after that, the British destroyer changed course, and left the controversial area.

However, the British Ministry of Defence denies that warning shots were fired by the Russians, and denies that HMS Defender yielded to Russia’s threat of force (ref. 1). They are spinning the warning shots as an unrelated gunnery exercise in the distance that had nothing to do with the FONOP.

But onboard HMS Defender at the time was a BBC journalist, Jonathan Beale. He has presented video and audio of the confrontation (ref. 2, 3). The crew of HMS Defender was even filmed putting on protective clothing as tensions escalated.

Clearly the audio proves that a Russian did warn the British, “If you don’t change course I’ll open fire”.

Now, why does it matter if the British changed course or not? If the Daring class destroyer did actually chicken out, and not do the daring thing, that means those waters are in effect Russian.

The fact of the matter is that all territory is claimed and defended by the sword!

The British claimed to have been conducting “innocent passage through Ukrainian territorial waters”. Yet, they were sailing near Crimea, even near Cape Fiolent.

Since 2014, Crimea is no longer a part of Ukraine but rather is a part of the Russian Federation. To insist otherwise is to militarily challenge Russia.

There is no doubt that these sorts of FONOPs will happen again, both in the Black Sea and in the South China Sea. At some point, though, there will be war, and it will be fierce!

I want to now draw your attention to the arrogance and delusion of the remarks of a retired British Rear Admiral on this incident (ref. 4).

Surely, it is sheer arrogance to think that one warship far from home can defend itself against a multitude of aircraft near their home base.

Isaiah 2 prophesies that in due time “all the ships of Tarshish” will be humbled. Tarshish, for those who don’t know, is England.

Presumably, the ships of the navies that fight for the Devil will be hunted down and sunk. The Bible prophesies, in time, the Devil that is in the sea will be slain (ref. Isaiah 27:1-8).

The military power of the kings of the east is today unrivalled because God is the LORD of hosts.

Needless to say, every sailor, airman, and soldier fighting on the wrong side of this war will not only die in this world but burn in the hereafter. Never mind what that sailor, airman, or soldier might have thought he or she was doing. Ignorance will be no excuse.

Those individuals that managed to survive the east and gather at Armageddon will still be slain by Jesus Christ himself.

And the remnant were slain of the sword of him that sat upon the horse, which sword proceeded out of his mouth: and all the fowls were filled with their flesh.