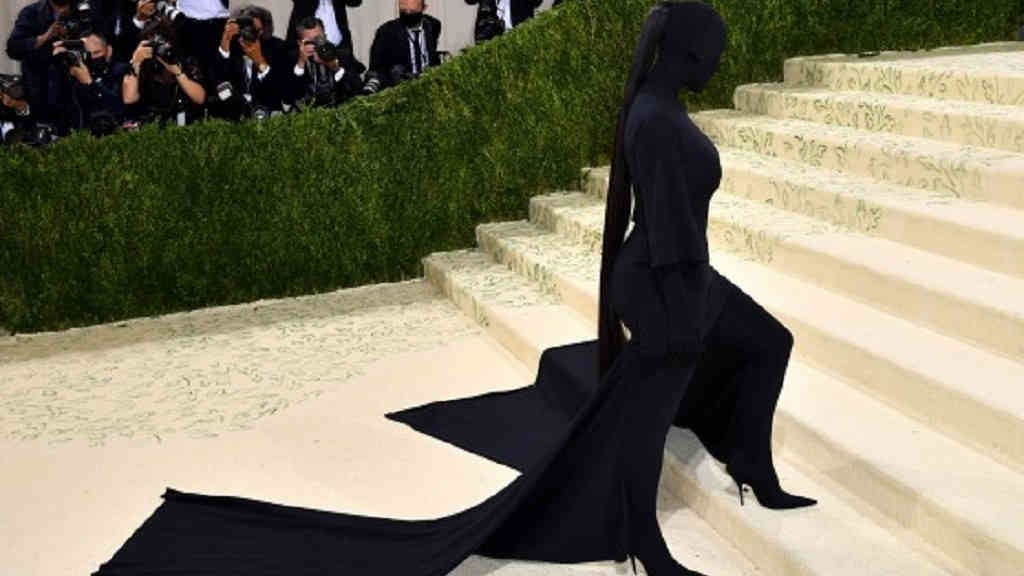 At the Met Gala 2021, American celebrity Kim Kardashian, famed for the reality TV show “Keeping up with the Kardashians”, wore an all-black Balenciaga outfit, covering even her entire face, an outfit apparently designed by her former husband, Kanye West (ref. 1). Her fashion statement was a homage to Islam’s burqa, or to Harry Potter’s wraith-like Dementor, or to the coming “black one”, or to all three.

First of all, black represents darkness, and white represents light. This is why black is the colour of ISIS, and why women under the Taliban are to wear black burqas, while born-again Christians, after the Second Coming, will wear white robes (ref. Revelation 7:13-14).

Around November 2019, I made the call that, in due time, the American rapper and self-proclaimed evangelical Christian, Kanye West, would be the false prophet of Revelation 13, the one that will appear in Mystery Babylon with two horns like a lamb but will speak as a dragon (ref. Revelation 13:11). I made that call based on the name of his then wife, Kim Kardashian, but also because of his own full birth name, “Kanye Omari West”, which literally means “let’s give to Allah (the god of the Swahilis) the west”. The name, “Kardashian”, of course, brings to mind Kardash, as in Abdullah Qardash, also spelt Kardash with a K, 666. Of course, since then, the demons around Kanye West have convinced him to divorce Kim Kardashian.

Kanye West has also started to call himself “Ye”. A few weeks ago, in August 2021, in a filing at a Los Angeles superior court, he formally changed his name from Kanye Omari West to Ye (ref. 2).

As I have said before, the name “Ye” is quite likely one of the three names of God. Ye as in Je-sus, Ye-hudah (Judah), and Je-rusalem. Another of the three is Yah as in Hallelu-jah, which means “Praise you the LORD”. And another is “Yo” as in Jo-el, which means “The LORD is God”.

Remember, Isaiah 14 explains that Satan wants to be like the most High.

… O Lucifer… For thou hast said in thine heart, I will ascend into heaven, I will exalt my throne above the stars of God: I will also sit upon the mount of the congregation, in the sides of the north: I will ascend above the heights of the clouds; I will be like the most High.

Now, concerning “the black one”, that expression comes from the early Christian Barnabas.

We know that all of the Bible was inspired by God.

All scripture is given by inspiration of God, and is profitable for doctrine, for reproof, for correction, for instruction in righteousness: That the man of God may be perfect, throughly furnished unto all good works.

For prophecy came not in old time by the will of man: but holy men of God spake as they were moved by the Holy Ghost.

But there may well also be texts outside the canon of the Bible that were inspired by God.

Then tidings of these things came unto the ears of the church which was in Jerusalem: and they sent forth Barnabas, that he should go as far as Antioch. Who, when he came, and had seen the grace of God, was glad, and exhorted them all, that with purpose of heart they would cleave unto the Lord. For he was a good man, and full of the Holy Ghost and of faith: and much people was added unto the Lord. Then departed Barnabas to Tarsus, for to seek Saul

In one of the writings of Barnabas, known as the epistle of Barnabas, assuming that scholars have preserved and translated it correctly, the one that is against Christ at the time of the end is described as “the Black One”: “Wherefore let us take heed in these last days. For the whole time of our faith shall profit us nothing, unless we now, in the season of lawlessness and in the offenses that shall be, as becometh sons of God, offer resistance, that the Black One may not effect an entrance.”

By the black one, I think, Barnabas was referring to the false prophet, the one with two horns like a lamb, namely, Kanye West, who will be as antichrist and as Satanic as the first beast, the Assyrian.

At Nicaea, Barnabas’ writings were not included in the list of canonical books. Eusebius, the bishop of Caesarea circa 314 AD, for one, rejected it.

Though the epistle of Barnabas is not in the Bible, it may still be of the Holy Ghost. I think, it was not included in the Bible because it would not have benefited Christians to know that the false prophet at the time of the end will be a black man, at least not until now.

Contrast Barnabas with someone such as Hippolytus of Rome, a disciple of Irenaeus. Hippolytus wrote that the Antichrist at the time of the end would come from the tribe of Dan. That is completely wrong. Neither the beast nor the false prophet will be Jewish. Hippolytus and Irenaeus may have been pious Christians, but it cannot be said that they were inspired by the Holy Ghost.

Barnabas, however, is different, because the Bible itself expressly says that Barnabas was full of the Holy Ghost when he was preaching along with the apostles.

Time will tell whether Kanye West is the false prophet of Revelation.

The Bible says, the false prophet will attempt to convince the earth that he is a prophet of God by doing supernatural wonders.

Even him, whose coming is after the working of Satan with all power and signs and lying wonders, And with all deceivableness of unrighteousness in them that perish; because they received not the love of the truth, that they might be saved.

The supernatural, or magic, is simply demons doing things. Demons as well as angels are beings that humans cannot see. So when a demon holds up something, it seems that that thing is floating in the air.

Never forget, what one side can do, the other can also do.

Then the devil taketh him up into the holy city, and setteth him on a pinnacle of the temple, And saith unto him, If thou be the Son of God, cast thyself down: for it is written, He shall give his angels charge concerning thee: and in their hands they shall bear thee up, lest at any time thou dash thy foot against a stone.

Consider, for instance, the British magician, Dynamo. Dynamo, whose mother is Muslim, sometimes performs actual magic rather than illusions, in particular levitation (ref. 3).

4. “Dynamo The Magician – fish from a bucket”, youtube.com/watch?v=bEeqbaF7Sys