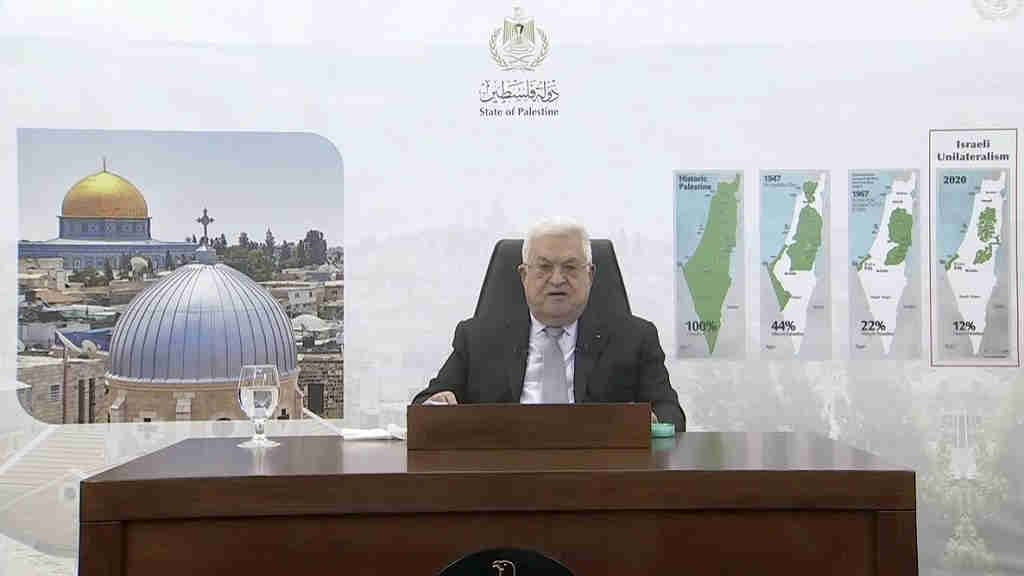 In an address to the United Nations, Palestinian Authority leader Mahmoud Abbas declared that Israel has one year to withdraw from all territories it acquired in 1967, including east Jerusalem, or else (ref. 1).

Israel, for its part, has brushed aside the demand (ref. 1).

So, this ultimatum presumably means there will be war within one year.

Proclaim ye this among the Gentiles; Prepare war, wake up the mighty men, let all the men of war draw near; let them come up: Beat your ploughshares into swords, and your pruninghooks into spears: let the weak say, I am strong… Let the heathen be wakened, and come up to the valley of Jehoshaphat: for there will I sit to judge all the heathen round about.

Of course, no one knows when precisely it will start, for no man knows the day or the hour, not the angels, neither the Son, only the Father (ref. Mark 13:32). Presumably, everything everywhere must be right before it does start.

But of that day and that hour knoweth no man, no, not the angels which are in heaven, neither the Son, but the Father. Take ye heed, watch and pray: for ye know not when the time is.

Also, from time to time, I have noticed the other side almost trying to weasel out of it. America’s on and off tensions with China and Russia, for instance. One week, there is maligning and antagonising. The next, there is grovelling.

Even so, eventually, what is to happen will happen.

There is no peace, saith the LORD, unto the wicked.

Anyway, when it all does start, that is to say when the abomination of desolation is set up, and also when the two witnesses arrive, then everyone who understands the Bible will be able to count the number of days until the day of the LORD (ref. Daniel 12:11-12, Revelation 11:3).

And from the time that the daily sacrifice shall be taken away, and the abomination that maketh desolate set up, there shall be a thousand two hundred and ninety days. Blessed is he that waiteth, and cometh to the thousand three hundred and five and thirty days.

Now, for those who don’t know, I should mention, the Six Day War in 1967 was the war of Psalms 83. I wrote about this in my 2017 book. All of the belligerents of that war were precisely the ones mentioned in Psalms 83. Even the PLO in Lebanon is there literally: “the Philistines with the inhabitants of Tyre”.

As a matter of fact, the 1967 war was an attempt by a confederation of Arab peoples to cut off Israel from being a nation.

They have taken crafty counsel against thy people, and consulted against thy hidden ones. They have said, Come, and let us cut them off from being a nation; that the name of Israel may be no more in remembrance. For they have consulted together with one consent: they are confederate against thee

The 1967 war resulted in Israel retaking Jerusalem (ref. 2), and doing so from the east, specifically the Lion’s gate, also known as Stephen’s gate, named after the first Christian martyr.

There were also a lot of miracles during the Six Day War. Clearly, the LORD of hosts was with Israel in that war (ref. 3, 4)!

The LORD of hosts is with us; the God of Jacob is our refuge. Selah.

And I am not the only one to have said that 1967 was Psalms 83. The following South African pastor preaching in Australia sort of says the same thing (ref. 5), though he does not correctly identify the belligerents. Of course, the Ishmaelites and the Hagarenes are Egypt, because per Genesis 21:17-21 Ishmael of Hagar went to live in Egypt.

I suppose, one of the reasons why there will be no more wars after the day of the LORD, at least for one thousand years, is that this world will see for itself, and come to learn, the meaning of God’s title, the LORD of hosts.

In time, there will be a new world order.

… for out of Zion shall go forth the law, and the word of the LORD from Jerusalem. And he shall judge among the nations, and shall rebuke many people: and they shall beat their swords into plowshares, and their spears into pruninghooks: nation shall not lift up sword against nation, neither shall they learn war any more.

1. Mideast Monitor (25 September 2021), “Abbas: Israel has only one year to withdraw from 1967 occupied territories”, middleeastmonitor.com

3. “Did God Help Israel During The Six Day War?”, youtube.com/watch?v=CR-8pmLBStA

4. “Hand of God in the Six Day War!”, youtube.com/watch?v=wLrBKYzt0II