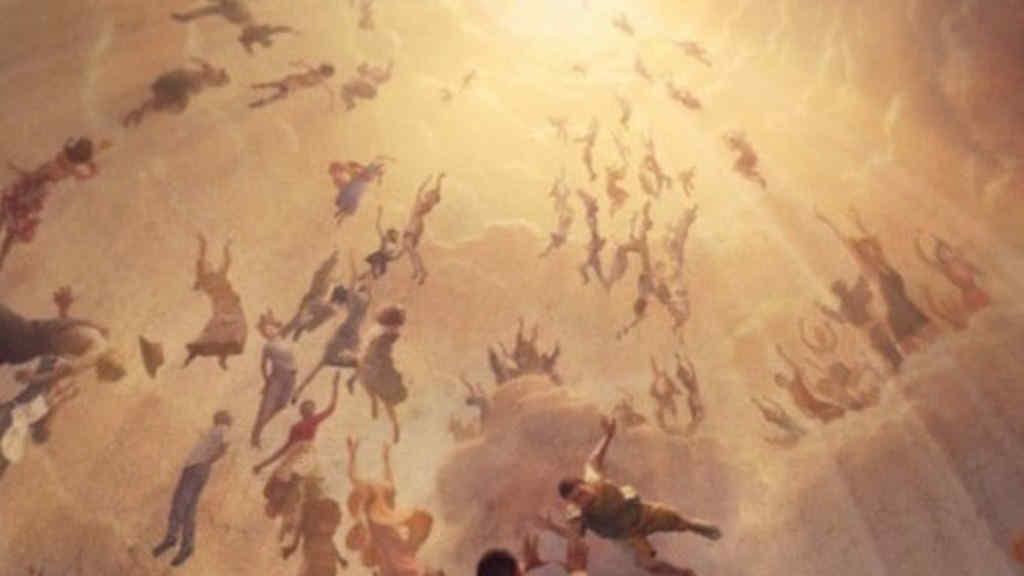 Revelation 20:4-7 is mysterious and to many confusing.

Revelation 20:4 speaks of Christians who are killed during the great tribulation, a period of forty-two months that precede the Second Coming of Jesus Christ. These are all who do not worship the beast and his image, which include all who refuse to receive the mark of the beast. These Christians will live and reign with Christ for a thousand years, some here on earth (ref. Jude 1:14-15) while others in heaven (ref. Revelation 7:13-17). A day with the LORD in heaven is equal to a thousand years on earth (ref. 2 Peter 3:8).

And I saw thrones, and they sat upon them, and judgment was given unto them: and I saw the souls of them that were beheaded for the witness of Jesus, and for the word of God, and which had not worshipped the beast, neither his image, neither had received his mark upon their foreheads, or in their hands; and they lived and reigned with Christ a thousand years.

Revelation 20:5 describes “the rest of the dead” and mentions “the first resurrection”.

But the rest of the dead lived not again until the thousand years were finished. This is the first resurrection.

And then Revelation 20:6 explains that those who were among the first resurrection shall reign with Christ a thousand years.

Blessed and holy is he that hath part in the first resurrection: on such the second death hath no power, but they shall be priests of God and of Christ, and shall reign with him a thousand years.

To be clear, the said thousand years is the Millennial Reign of Jesus Christ, because Revelation 20:7 explains that Satan shall be loosed out of his prison of hell after that one thousand years.

And when the thousand years are expired, Satan shall be loosed out of his prison,

Now, if you were to read verses 4 to 6 without an understanding of the whole picture, you would think that there is a fallacy, a mistake in logic that makes this part of Revelation 20 nonsense. What I mean is this: Verse 4 says, one group of the dead will be resurrected and they will reign with Christ for one thousand years. Then, verse 5 says, the rest of the dead, meaning another group, will be resurrected after the one thousand years. This resurrection is described as “the first resurrection”. Then, according to verse 6, this other group will also reign with Christ during the same one thousand years.

Yet, we know that the word of God is truth (ref. 1 Thessalonians 2:13) and God is not the author of confusion (ref. 1 Corinthians 14:33), and so there is no mistake and the aforementioned verses only seem to be nonsense. When considered carefully, it actually all makes sense. Let me explain.

First of all, the “first” or “foremost” resurrection, in Greek “protos”, does not refer to the resurrection of the dead at the time of the seventh trumpet, because the first to ever be resurrected was the Son of man himself, something that happened over two thousand years ago, and the next to be resurrected will be the two witnesses per Revelation 11:11-12, and then after that, the seventh trumpet will sound, which is the reaping of the harvest (ref. Revelation 14:15-16). The reaping will include the dead in Christ as well as those in Christ who are alive at the time of the seventh trumpet (ref. 1 Corinthians 15:51-52). The reaping is popularly known as “the rapture”.

These two resurrections will happen around the time the earth and the heaven pass away (ref. Revelation 20:11), when the sun will burn up everything (ref. 2 Peter 3:10).

And I saw a great white throne, and him that sat on it, from whose face the earth and the heaven fled away; and there was found no place for them. And I saw the dead, small and great, stand before God; and the books were opened: and another book was opened, which is the book of life: and the dead were judged out of those things which were written in the books, according to their works. And the sea gave up the dead which were in it; and death and hell delivered up the dead which were in them: and they were judged every man according to their works. And death and hell were cast into the lake of fire. This is the second death.

At this time, a “new Jerusalem” will be created (ref. Revelation 21) for all who are “saved” – that is to say, for all of “the bride of Christ” across all time.

The former will resurrect all Christians who are killed during the great tribulation, the final forty-two months before the day of Christ. The latter will resurrect all others who are Christ’s, namely “the rest”, which includes everyone in the book of life that died in the past, and every Christian that dies before the final forty-two months, and every mortal Christian and Jew that will die during the Millennial Reign of Jesus Christ, and also every mortal Christian and Jew that will die after that when the time comes for Zion and Jews to be the light of the world.

Everyone in the latter resurrection will go to heaven, a place that exists beyond the space-time continuum. Remember, Einstein figured out that time is the fourth dimension, inextricably connected to the three dimensions of space, which are height, length and width.

From heaven, a select group numbering in the tens of thousands (ref. Jude 1:14) will return to earth together with Jesus Christ at the time of the Second Coming.

These saints will join with those who are reaped at the time of the reaping of Revelation 14, to serve as priests and kings for Jesus Christ, for one thousand years.

Accordingly, the entire body of Christ – his elect from the past, the present and the future – will be together with Jesus Christ on the day of the Second Coming.

Contrary to popular opinion, a person that dies that is faithful to the LORD does not go to heaven immediately. Rather, that person sleeps in the dust, and he or she is awaken only either at the time of the seventh trumpet or else at the time of “the first resurrection”.

Take the apostle Paul, for instance. Right now, Paul would be asleep in the dust, because he was beheaded by the Romans during the reign of Nero. Paul will be resurrected only at the time of the first resurrection in the distant future. Yet, right now, the same Paul is also alive in heaven. This is because heaven exists beyond the space-time continuum.

It is important to know that all who will serve as priests and kings for Jesus Christ here on earth during the Millennial Reign have been predestinated by God to do so (ref. Romans 8:29-30, Ephesians 1:4-11).

Having made known unto us the mystery of his will, according to this good pleasure which he hath purposed in himself: That in the dispensation of the fulness of times he might gather together in one all things in Christ, both which are in heaven, and which are on earth; even in him: In whom also we have obtained an inheritance, being predestinated according to the purpose of him who worketh all things after the counsel of his own will

Every other Christian will remain in heaven to serve the Lamb over there (ref. Revelation 7:15).

Furthermore, only men will serve as priests and kings for Jesus Christ here on earth during the Millennial Reign.

Women are not to teach matters spiritual, nor usurp authority over the man (ref. 1 Timothy 2:12), because Eve was the one in transgression, the one deceived by the serpent. Women, generally, are saved through “childbearing” and by faith in Jesus Christ (ref. 1 Timothy 2:15).

Surely, young children and babies cannot be priests and kings either.

This means, among the living, only men will be reaped and made immortal at the sounding of the seventh trumpet.

The idea that babies will disappear at the time of the rapture is wrong. And if babies and young children are to be left behind, then so too must women be left behind to take care of them. Of course, this applies to locations outside of Babylon.

Within Babylon, by the time the seventh trumpet sounds, there will likely be no Christians left alive. There could conceivably be a few who are alive because they are off-grid preppers and survivalists. But generally, everyone there would have either received the mark of the beast, or else been killed for refusing to receive the mark of the beast. Consequently, over there, all Christian men, women and children will be reaped at the sounding of the seventh trumpet.

Elsewhere, Christian women and children who are alive will be left behind to carry on living as humans.

Seek ye out of the book of the LORD, and read: no one of these shall fail, none shall want her mate: for my mouth it hath commanded, and his spirit it hath gathered them.

It might be that some Christian men will also be left behind because they are not counted among those who have been predestinated by God to rule.

This means anyone outside of Babylon who is left behind is not necessarily damned.

Indeed, with regard to Jews, every Jew who has endured until the end, everyone who is alive on the day of the LORD, will be holy (ref. Matthew 24:13, Isaiah 4:3), as in filled with the Holy Spirit.

The Son of man shall send forth his angels, and they shall gather out of his kingdom all things that offend, and them which do iniquity; And shall cast them into a furnace of fire: there shall be wailing and gnashing of teeth.

Of course, for Christians it is always better to be reaped at the time of the harvest than not to be reaped, because once you have been saved you are forever saved.

Behold, I come quickly: hold that fast which thou hast, that no man take thy crown.

Now, by the time of the “new Jerusalem”, everyone who is alive will have been “born again”, born into an immortal and incorruptible body. At that time, all carbon based life will be no more, having been burned in the fire of the sun. This is why everyone must become a Christian and be born again and made immortal to see the ultimate kingdom of God, the new Jerusalem.

Jesus answered and said unto him, Verily, verily, I say unto thee, Except a man be born again, he cannot see the kingdom of God.

Being born again, not of corruptible seed, but of incorruptible, by the word of God, which liveth and abideth for ever. For all flesh is as grass, and all the glory of man as the flower of grass. The grass withereth, and the flower thereof falleth away: But the word of the Lord endureth for ever. And this is the word which by the gospel is preached unto you.

This is why to be a proper and faithful Christian is to have eternal life.