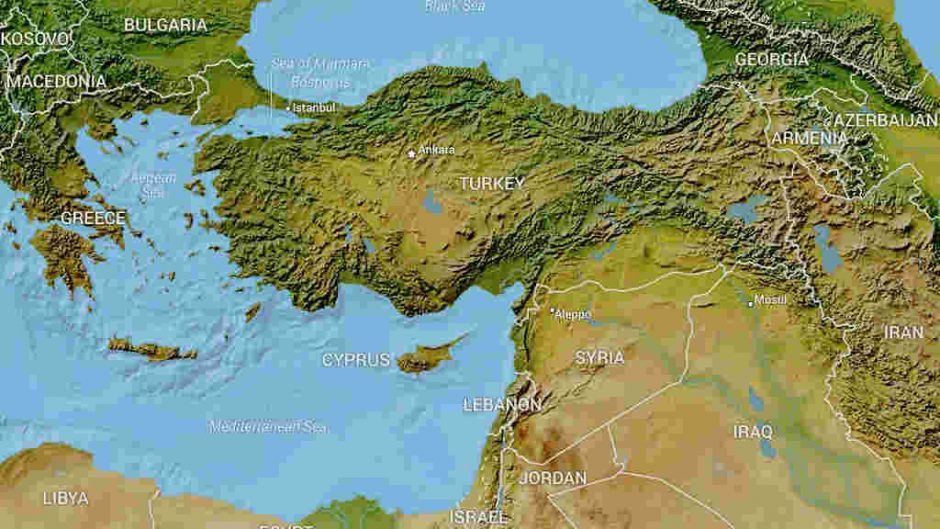 There has been a dramatic turn of events, but this is no surprise to Bible prophecy watchers: Turkey has suddenly decided to close its airspace to all Russian military and civilian planes carrying troops from Russia to Syria (ref. 1).

Two months ago, when conflict broke out between Russia and Ukraine, Turkey effected the 1936 Montreux Convention, blocking Russian warships from transiting the Dardanelles and the Bosphorus, thereby preventing Russia from moving armed forces from the Mediterranean into the Black Sea (ref. 2).

In time, when the beast with seven heads and ten horns manifests, all Russian supply lines through Turkey will be cut. Of course, without the ability to reinforce and resupply, Russia’s military position in Syria will be untenable.

This is supposed to happen. For the Bible prophesies that the beast will overrun Syria. Isaiah 17 reads, the kingdom shall cease from Damascus, and Damascus shall be taken away from being a city and it shall be a ruinous heap (ref. Isaiah 17:1-3). In other words, the government of Assad, which is now supported by Russia, will fall, and Syria will become a part of an Islamic State!

The burden of Damascus. Behold, Damascus is taken away from being a city, and it shall be a ruinous heap. The cities of Aroer are forsaken: they shall be for flocks, which shall lie down, and none shall make them afraid. The fortress also shall cease from Ephraim, and the kingdom from Damascus… saith the LORD of hosts.

So, what America’s CIA started in 2011, in an attempt to remove Assad and deprive Russia of its base in Syria, will be finished by the beast, whom the Bible describes as “the Assyrian”, the one from Nineveh who is to control at least the lands of ancient Assyria.

At the height of his power, the beast will lead an empire of ten nations. There is no doubt that Turkey, where Pergamos is, will wage war for the beast (ref. Revelation 13:2). Today, Turkey is the second most powerful military within NATO, second only to the USA. Iran also, which Israel is wary of, will be a part of the beast.

And the beast which I saw was like unto a leopard, and his feet were as the feet of a bear, and his mouth as the mouth of a lion: and the dragon gave him his power, and his seat, and great authority.

There should be no surprise that elements of the CIA, in particular the Satanists of Skull and Bones, have long secretly advanced the cause of Islam. In 2021, they suddenly surrendered Afghanistan to the Taliban and ISIS-K. In 2011, they toppled Muammar Gaddafi and handed Libya over to Islamists. In 2003, they invaded Iraq under false pretences and removed the leftist Saddam Hussein, giving the nation over to chaos and ultimately the Islamic State. Even as far back as 1975 and 1963-66, they aided and abetted the Islamists of Indonesia, in an attempt to expand the reach of Islam. Though East Timor did have something to do with the Cold War because Fretilin was Marxist-Leninist, the Borneo Confrontation did not.

The Bible prophesies that Mystery Babylon, the mother of harlots and abominations of the earth, sits upon the beast (ref. Revelation 17:3). This tells us that she steers the beast, and enables the beast to rise.

And the ten horns which thou sawest upon the beast, these shall hate the whore, and shall make her desolate and naked, and shall eat her flesh, and burn her with fire. For God hath put in their hearts to fulfil his will, and to agree, and give their kingdom unto the beast, until the words of God shall be fulfilled.

After that, at the time of the false prophet, Babylon will make peace with the beast, and will even fight on the side of the beast.

So, at first, this will be a three-sided worldwide war, but then it will simplify into two sides, evil versus good.

Now, returning to the matter of Syria and Isaiah 17.

In the news also are reports that Turkey has resumed its campaign against Kurds across both Iraq and Syria (ref. 3), carrying out artillery and drone strikes against cities such as Kurdish-majority Kobani.

It is very interesting that institutionally the YPG, the PKK, etc., are all leftists, and some are even ex-Marxist. PKK in Kurdish stands for “Kurdistan Workers’ Party”.

Eventually, the beast, backed by Turkey, will push all the way into Syria.

Russia will be in no position to defend Syria, because Turkey’s supply lines will be shorter.

What is more, America, which had allied with the Kurdish SDF in order to keep Syria’s oil from Assad, will betray the Kurds, as is her way. In due time, America will abandon the part of Syria that the Kurds control. Indeed, one former US Army General, the ex-commander of US Forces Europe, Ben Hodges, has already come out and said that America’s support for the YPG in Syria was “a mistake”, because it harmed America’s relations with Turkey (ref. 4).

So, when the beast invades Syria, it will be Israel that will push at the beast. This is the prophecy of Daniel 11:40.

And at that time of the end shall the king of the south [Negev, Israel] push at him: and the king of the north [the Assyrian, incl. Turkey] shall come against him like a whirlwind, with chariots, and with horsemen, and with many ships; and he shall enter into the countries, and shall overflow and pass over.

But the IDF will not have the military strength to defeat the beast, and so the IDF will be forced back and will even lose the northern half of Israel, “Ephraim” (ref. Isaiah 17:3).

The fortress also shall cease from Ephraim, and the kingdom from Damascus…

And in that day it shall come to pass, that the glory of Jacob shall be made thin, and the fatness of his flesh shall wax lean.

It is remarkable that when Turkey first moved against the Kurds of Syria in 2018, they named their operation “Olive Branch”, bringing to mind the olives of Isaiah 17.

And it shall be as when the harvestman gathereth the corn, and reapeth the ears with his arm; and it shall be as he that gathereth ears in the valley of Rephaim. Yet gleaning grapes shall be left in it, as the shaking of an olive tree, two or three berries in the top of the uppermost bough, four or five in the outmost fruitful branches thereof, saith the LORD God of Israel.

Prophetically, Israel will be pushed all the way back to the Negev, which is more or less Judah, and which happens to be a stronghold for the IDF today.

At that point, both Judah and Jerusalem will be besieged (ref. Zechariah 12:2). That means, in effect, Israel will be captive.

But then, at the appointed time God, who is the LORD of hosts, will turn back this captivity (ref. Zephaniah 3:20).

At that time will I bring you again, even in the time that I gather you: for I will make you a name and a praise among all people of the earth, when I turn back your captivity before your eyes, saith the LORD.

In terms of military pressure, Israel will be liberated.

When the siege is lifted, the remnant of Israel, assisted by the archangel Michael (ref. Zechariah 12:7-8, Daniel 12:1), and also made wise by the Holy Spirit (ref. Zechariah 12:10, Joel 2:28-29), will fight with renewed strength and according to the fury of the LORD of hosts.

This will be a fight for the promised land, and for glory.