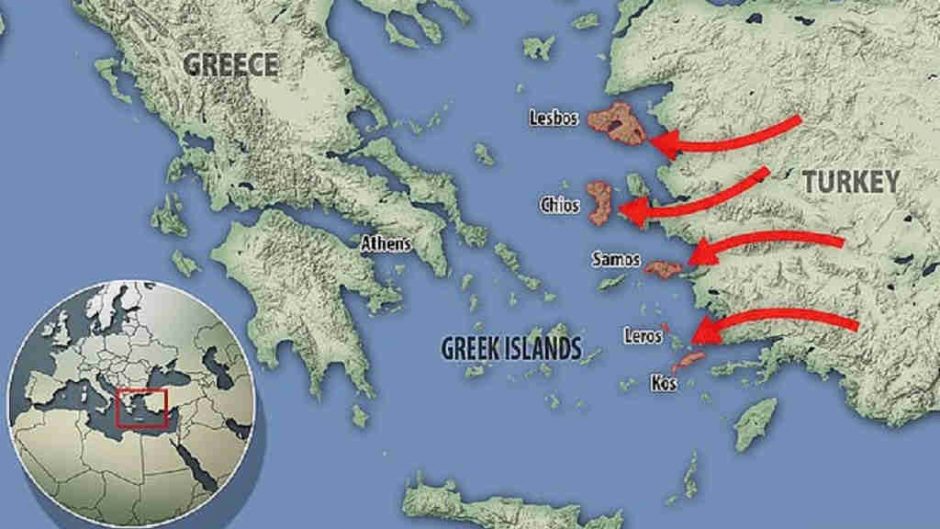 A few days ago, as he observed a military exercise near Izmir on Turkiye’s western coast involving some 10000 troops, President Recep Tayyip Erdogan demanded in a televised speech that Greece stop arming the islands of the Aegean Sea, warning that these hostile actions will result in regret (ref. 1). This comes after Turkiye suddenly stopped all exploratory talks with Greece concerning the Aegean because of what Turkiye calls airspace violations (ref. 1).

Prophetically, the fourth beast is to at least encompass all of the lands of the third beast, that is to say, the empire of Alexander the great.

Already on CNN Turk, there is open discussion of a future Turkish invasion of Greece (ref. 2).

What is interesting is that the USA has ten military bases in Greece. Therefore, any invasion of Greece would almost certainly see Turkiye fight against the USA.

In Syria, Turkiye has now resumed its war against the Kurds, including the so-called “Syrian Democratic Force”, which is supposedly backed by the USA (ref. 3), the same SDF that fought courageously and spilt their blood to take ground from ISIS. Turkiye, together with the jihadists who are on their side – the absurdly branded “Syrian National Army” – are preparing to attack areas such as Manbij and Tal Rifaat and Kobane, which are controlled by the SDF.

Both the USA and Russia have publicly voiced their opposition, to no avail.

Russia even recently carried out a large-scale air strike drill in Syria together with the forces of Bashar al-Assad (ref. 4).

The SDF, for their part, are now saying that they will turn to Assad for help (ref. 5), the one whom the USA has been trying to topple.

Turkiye’s push into Syria is a precursor to Isaiah 17. Against the fourth beast, namely the forthcoming caliphate of the Assyrian, Damascus will not survive. This is Bible prophecy.

The burden of Damascus. Behold, Damascus is taken away from being a city, and it shall be a ruinous heap. The cities of Aroer are forsaken… The fortress also shall cease from Ephraim, and the kingdom from Damascus…

Interestingly, as of now, the USA still has some presence in Kurdish-controlled northern Syria, despite Trump’s withdrawal. Once again, this means quite likely, Turkiye vs the USA.

Remember, as I have said, at first there will be a three-sided world-wide war, and then it will simplify into two. Before it becomes two, God will make the two beasts of Satan fight each other!

And then, the USA will betray the Kurds, as well as the European Union, and above all, Israel.

The violence done to me and to my flesh be upon Babylon, shall the inhabitant of Zion say; and my blood upon the inhabitants of Chaldea, shall Jerusalem say.

The whole world will see the USA for what she truly is. At that time, the USA will pledge allegiance to the Assyrian, and serve the emerging empire of the Islamic State! This means, beheadings (ref. Revelation 20:4), slavery (ref. Revelation 18:13), jihad (ref. Revelation 16:13) – every decree of ISIS.

And remember, the beast will be part clay and part iron (ref. Daniel 2:40-43). It will have in it the strength of iron – that is, the supernatural power of demons (ref. Revelation 13:7).

They who control the USA shall say, it is for their own “peace and safety”.

America’s vast nuclear arsenal suddenly in the hands of the Antichrist, who is hell-bent on world domination. No need for me to tell you what happens next.