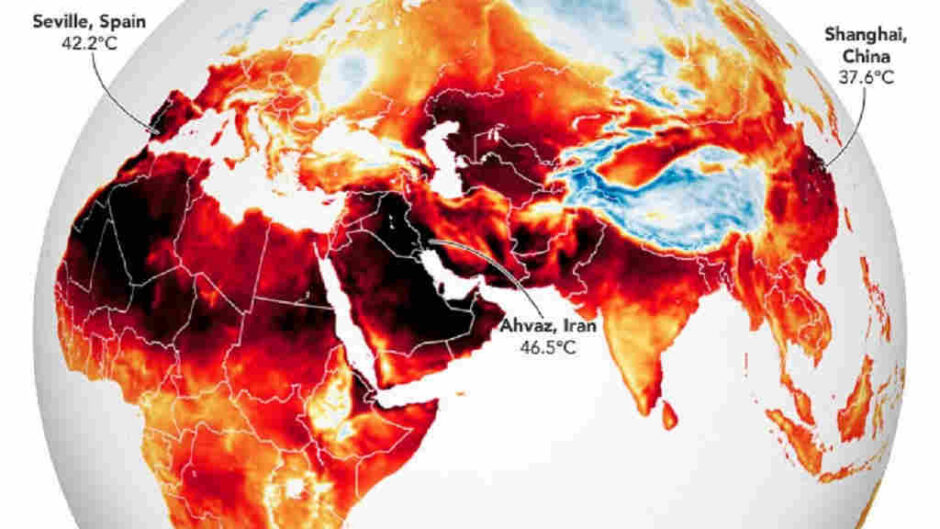 An unusual heatwave is happening in parts of Europe, in particular, Portugal, Spain, France, Greece (ref. 1). The temperature in the UK also has reached its highest ever (ref. 2). Hundreds of people have died from heatstroke and the like (ref. 3). The scorching heat and strong winds have also led to raging wildfires. One French meteorologist has described it as “an apocalypse of heat” (ref. 3).

In 2019, Europe experienced a similar heatwave, but this one is more intense. There have also been heatwaves in the USA and in Australia and elsewhere, in recent years.

Researchers working with the Goddard Earth Observing System have noticed that in June and July 2022, heatwaves have struck Europe, North Africa, the Middle East and Asia (ref. 4). Tunisia reached a forty-year record of 48 degrees celsius. Iran, in late June, went higher than that, 52 degrees celsius. Even China has seen some buckled roads, melted tar and cracked roof tiles. Shanghai recorded its highest temperature ever this July, 40.9 degrees celsius.

The point is that, in recent years, across much of the earth there have been occasions of unusually extreme heat.

The Bible prophesies that in these last days, the fourth trumpet and vial will involve some kind of extraordinary solar activity, and consequently there will be “great heat” upon the earth, a heatwave that will “scorch men with fire”. This will be brought about by an angel of God.

This means the fourth trumpet and vial should impact only the lands of the empire of the Assyrian, or at least this is my understanding as of now.

The prophecy reads, the men who are scorched with great heat at the time of the fourth trumpet and vial will blaspheme the name of God.

Right now, meteorologists, self-declared experts, and politicians the world over, are all blaming “climate change”, a science fiction conceived to deny the existence of God and his angels. Even the UN Secretary-General – the UN being the way it is with its occult meditation room that was set up by “the Lucis Trust”, a foundation of the late new-age mystic Alice Bailey – attributes the heatwaves that are now plaguing Europe to man-made climate change (ref. 5).

Right now, in Europe, in Asia, and even in the Islamic parts of the Middle East that are experiencing heatwaves, there are no news headlines of anyone blaspheming the name of God, which must be for the purposes of this prophecy either “Jesus” in some language, or a pronouncing of the Tetragrammaton, יהוה‎ (YHWH), or an abbreviation of one of the two.

Moreover, as of now, Islamists are indifferent to both Jesus Christ and יהוה‎. Islamists merely insist that “Allah is greater”.

This will change when the Assyrian, or the Antichrist, begins his time as the leader of the beast with seven heads and ten horns.

It is Bible prophecy that the Antichrist will speak blasphemy against God, against his tabernacle and against all them that dwell in heaven (ref. Revelation 13:5-6, Daniel 7:25).

And there was given unto him a mouth speaking great things and blasphemies; and power was given unto him to continue forty and two months. And he opened his mouth in blasphemy against God, to blaspheme his name, and his tabernacle, and them that dwell in heaven.

The Antichrist, a servant of the rebellious angel Satan who was cast out of heaven, will know the actual name of God, and he will publicly blaspheme God and his holy name. It follows that those who are within the realm of the Antichrist who pledge allegiance to him will come to know the name of God, and thus be able to blaspheme that name.

The name of God should be hallowed, meaning greatly revered and honoured.

Our Father which art in heaven, Hallowed by thy name. Thy kingdom come. Thy will be done in earth, as it is in heaven… For thine is the kingdom, and the power, and the glory, for ever. Amen.

Now, in these last days especially, all should give glory to God, the creator of all things seen and unseen (ref. Revelation 19:1, 14:7).

Give glory to God, who is the Father, the Son and the Holy Spirit, for his kingdom, namely the kingdom of God, will change the world, and he will bring an end to suffering and an end to evil.