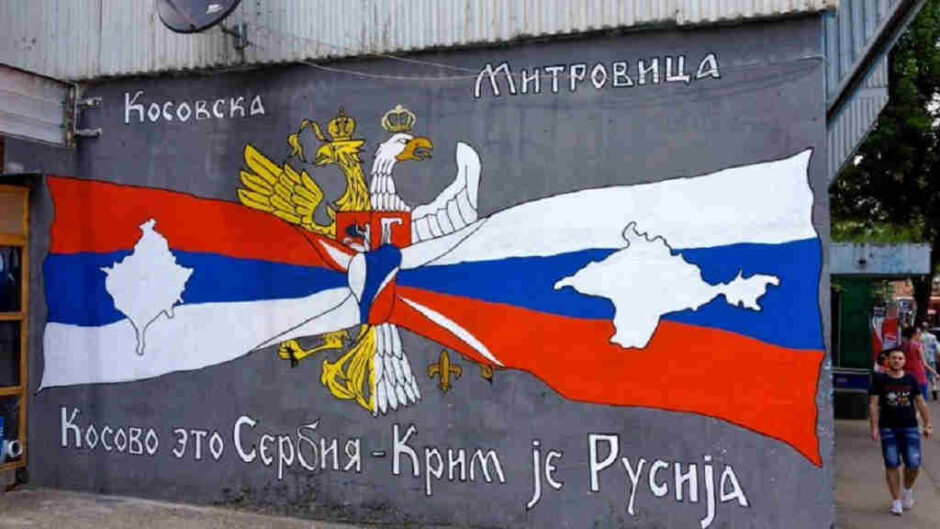 In the 1990s, a series of ethnic conflicts led to the balkanisation of Yugoslavia. The term balkanisation itself refers to the disintegration into smaller independent states in the early part of the 20th century of the Balkan Peninsula, an area once ruled by the Islamic Ottoman Empire. In early 1998, war broke out in the area of Kosovo, between Orthodox Christians of Serbia and Muslim Kosovar Albanians. Supporting the latter were foreign mercenaries from Albania, Bosnia, and Croatia, and also Islamic fundamentalists from as far as Saudi Arabia and Yemen to Egypt and even Afghanistan. The war lasted for fifteen months. In March 1999, NATO, led by the USA, intervened on the part of the Kosovars. Yugoslav authorities regarded this conflict against the Kosovars as essentially a sort of war on terror. This was before America’s own war on terror. In the end, Serbia was defeated by NATO. Ever since, NATO has maintained a peacekeeping force there called KFOR. In 2008, Kosovo declared formal independence from Serbia. USA, Britain, most of Europe, and the like, recognise Kosovo as an independent nation, but Serbia, Russia and China do not. Russia supports Serbia, because Russians and Serbs are Slavs, and also Orthodox Christian; but China supports Serbia because after Serbia somehow managed to shoot down an American F-117A nighthawk stealth bomber, America decided to bomb China’s embassy in Belgrade, killing several Chinese officials.

A few weeks ago, the prime minister of Kosovo declared that Serbian identity documents and vehicle plates would no longer be valid in the territory of Kosovo. This angered the many Serbs who still live in Kosovo. Some of them protested and set up roadblocks, and that in turn prompted Pristina to persecute them. Serbia, for its part, warned NATO to keep the peace and “do their job” in Kosovo, or else Serbia itself would move to protect the Serbs who are in Kosovo (ref. 1). Pristina’s raid against ethnic Serbs in northern Kosovo has provoked Serbia to put its armed forces on “full combat readiness” (ref. 2).

The USA and the EU want both sides to cool down.

But in all likelihood, when the time is right, the situation will boil over.

And when ye shall hear of wars and rumours of wars, be ye not troubled: for such things must needs be; but the end shall not be yet. For nation shall rise against nation, and kingdom against kingdom…

In other news, fighting between Tigrayans, who are Orthodox Tewahado Christian, and the forces of Ethiopian PM Abiy Ahmed Ali has started again. Yesterday, the government of Ethiopia bombed a kindergarten and playground in Mekelle, the capital of Tigray, killing four including two children, and wounding nine (ref. 3). Houses near the kindergarten were also destroyed. The name of the kindergarten, “Red Kids Paradise”, must have provoked the demons that are with Abiy Ahmed Ali. Tigray Television aired graphic images of children and adults with dismembered bodies. Tigrayan officials described the airstrike as “heartless and sadistic”. Indeed, such is the nature of evil. This war between Ethiopia and Tigray, which also involves the Islamic nation of Eritrea, is another war of nations and kingdoms prophesied to happen in these last days.

Concerning the matter of Taiwan, which would be the big one – the war of nations and kingdoms that I think will take peace from the earth – ever since Pelosi’s visit, and China’s corresponding military exercises that blockaded Taiwan, America has sent several more governors and senators to visit Taiwan in an official capacity, thereby making the point again and again that Taiwan is now an independent nation able to carry out its own foreign relations. The latest, Tennessee Senator Marsha Blackburn, even labelled China as “the new axis of evil” (ref. 4).

Woe unto them that call evil good, and good evil…

Though it seems that China is still reluctant to wage war against the USA – “China has no intention of fighting a war with the US” (ref. 5) – and though presumably China prefers to win without firing a single shot per Sun Tzu’s The Art of War, at some stage, war will break out, because this is Bible prophecy!

Some in China might be under the impression that China’s economic strength and prosperity can compel Taiwan to come to its senses. But this won’t happen. For one thing, the world economy is now collapsing, suffering from stagflation, and as all ships will rise when the tide rises, so all ships must inevitably fall when the tide falls. America is already in a recession, which is defined by two consecutive quarters of negative economic growth. Many other nations across the world, including the EU and Britain, are in economic trouble, because of inflation and extraordinary energy costs and so on. And now, China’s economy is also starting to slow down. China is troubled by Covid-19, by a property bust, by high youth unemployment, and by an unprecedented heatwave. Even the growth of China’s population is now diminishing because of economic turmoil and because of Covid-19, which is a bioweapon and pharmakeia of Babylon. A diminished population means less aggregate demand and so less economic wealth.

There should be no doubt that China’s accumulation of extraordinary wealth and power over these last few decades has come from God. “For there is no power but of God” (ref. Romans 13:1) and “wisdom and might are his” (ref. Daniel 2:20-21). This power is not for nothing. In Revelation, this power is described as “a great sword”.

I think, China’s economy will not necessarily become ever larger so that Taiwan can be convinced to return to the mainland without war. Inevitably, China will come to realise that war is the only way to recover Taiwan, and also break the American-led containment of China: war would secure once and for all China’s future.

As part of this war, there will be naval combat against the USA (ref. 6), and as a consequence, the Devil will lose all power in the sea (ref. Isaiah 27:1-8).

A recent Al Jazeera article used the word “leviathan”, a biblical metaphor, to describe China’s emerging navy: “This new leviathan now aims to challenge the might of the US navy, not content to be a regional player but a superpower in its own right” (ref. 7).

Actually, the US navy is “leviathan” (ref. 41), “the dragon that is in the sea”. This is because the USA is Mystery Babylon.

In that day the LORD with his sore and great and strong sword shall punish leviathan the piercing serpent, even leviathan that crooked serpent; and he shall slay the dragon that is in the sea. In that day sing ye unto her, A vineyard of red wine… he stayeth his rough wind in the day of the east wind.

Once and for a while, the dragon, namely Satan (ref. Revelation 12:3, 12:9), did control China: “the dragon throne” and all that. But in the 20th century, China was recovered by a small group of peasants who subsequently formed the Communist Party of China and the People’s Liberation Army of China.

So, although the world says China is evil and America is good, I tell you that it is the other way around. As the Bible prophesies, Satan has deceived the whole world.

And the great dragon was cast out, that old serpent, called the Devil, and Satan, which deceiveth the whole world: he was cast out into the earth, and his angels were cast out with him.

Now, returning to the matter of Kosovo, a while ago I stumbled across a Youtube video about the Kosovo war by Mark Felton (ref. 8). I was surprised to learn that the USA and Russia very nearly went to war in 1999. American General Wesley Clark, who was Supreme Allied Commander Europe at the time, ordered British and French paratroopers to assault Pristina airport, a position held by Russian forces. The assault would have meant open war between NATO and Russia. When KFOR was commanded to seize Pristina airport by force, the French pulled their paratroopers out of KFOR, leaving the task to the British alone. Commanding the British paratrooper contingent of KFOR was one General Mike Jackson, a British officer who was fluent in Russian. He delayed and ultimately refused to obey NATO’s order. Furious, General Clark flew to General Jackson’s headquarters and proceeded to instruct him face-to-face to seize and block the runways of Pristina airport. Jackson refused, telling Clark, “I am not going to start the third world war for you”. The meeting was very heated. It turned out, French and then British insubordination prevented America from having its way.

America and Russia were not to clash that year because it was not yet the time for the third world war.

Rather, the third world war will begin at the time of the second seal, when God who is the LORD of hosts wills it.

And there went out another horse that was red: and power was given to him that sat thereon to take peace from the earth, and that they should kill one another: and there was given unto him a great sword.

At the time of the fourth seal, there will be a three way fight (“the beast shall hate the whore”, ref. Revelation 17:16).

And I looked, and behold a pale horse: and his name that sat on him was Death, and Hell followed with him. And power was given unto them over the fourth part of the earth, to kill with sword, and with hunger, and with death, and with the beasts of the earth.

But then, by the time of Armageddon, the war will have simplified into two sides: one side evil; the other good.

During this world wide war, no doubt Belgrade will be against Pristina. These two will be at it, because the enemy, meaning the Devil, is everywhere.

… The fourth beast shall be the fourth kingdom upon earth, which shall be diverse from all kingdoms, and shall devour the whole earth, and shall tread it down, and break it in pieces.

And everywhere he must lose!