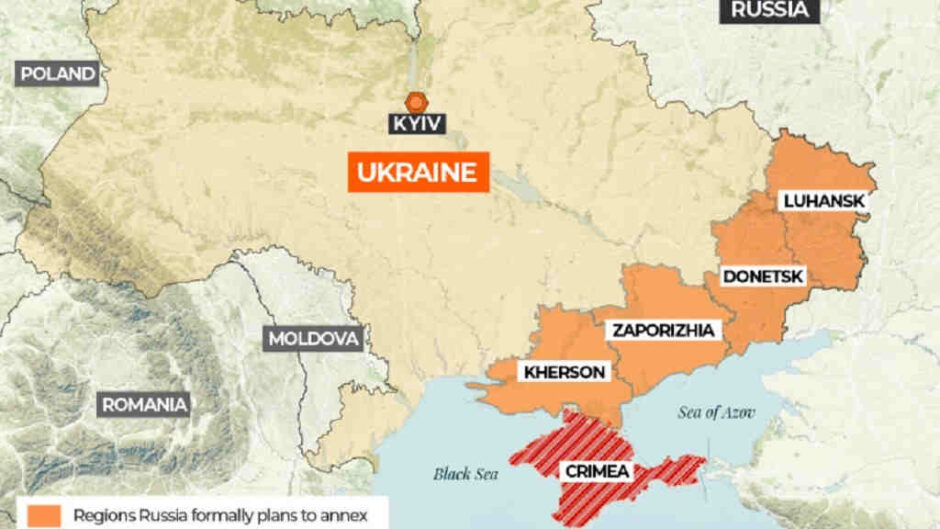 Yesterday, Russia formally annexed the regions Donetsk, Luhansk, Zaporizhzhia and Kherson (ref. 1). Days ago, the people in these four regions voted in a referendum overwhelmingly in favour of separating from Ukraine and joining the Russian Federation. The Kremlin says, these people are henceforth and forever Russian citizens, and any further attack on these annexed territories will be an attack on Russia itself (ref. 2). Last week, it was suggested that Russia might use nuclear weapons to defend “Russia’s territorial integrity” (ref. 2).

Ukraine, for its part, has refused to recognise the referendums, and has vowed to retake all of the contested areas, including Crimea.

Today, Ukraine captured the city of Lyman, which is in Donetsk, forcing the Russian troops that were there to withdraw (ref. 3).

It might seem that things are not going Russia’s way, but the fact of the matter is that, as of now, Russia controls more territory of Ukraine than it did before the start of its special military operation. This means, Russia has in fact conquered lands, as the Bible prophesies of the white horse of the first seal.

And I saw, and behold a white horse: and he that sat on him had a bow; and a crown was given unto him: and he went forth conquering, and to conquer.

Furthermore, since Russia does not yet control 100% of all four regions that it has just formally annexed, and since the matter of Moldova is also unresolved, Russia will surely continue going forth “conquering and to conquer”, as it is written.

Now, how Russia goes about this, and what happens next, is not clear to me.

The recent sabotage of the Nord Stream pipelines must have angered Russia. The undersea pipes, which cost billions, were constructed and paid for by both Europe and Russia (ref. 4). In February 2022, US President Joe Biden warned that America would bring an end to Nord Stream 2 if Russia invaded Ukraine (ref. 5). This is the sort of thing that US navy seals could easily do covertly.

Russia’s Defence Minister Sergei Shoigu said earlier this month that Russia is already at war with the collective west, with NATO (ref. 6).

Indeed, a few days ago, the Pentagon announced the opening of a command centre in Germany for the theatre of Ukraine (ref. 7).

With the fall of Lyman, and given the things that were said last week about the use of nuclear weapons to defend Russian territorial integrity, Ramzan Kadyrov of Chechnya, now a lieutenant general of Russia’s National Guard, has called for the use of a low-yield tactical nuclear weapon in Ukraine (ref. 8), presumably to deter Ukraine from advancing further.

It might be that Russia is supposed to go nuclear in Ukraine, for the world must go from where things are now to a future in which Mystery Babylon is utterly annihilated by the nuclear weapons of her enemies.

The Bible even describes this “curse” in Zechariah 5 as something that goes forth over the face of the whole earth, something that is brought forth by God himself.

And he said unto me, What seest thou? And I answered, I see a flying roll; the length thereof is twenty cubits, and the breadth thereof is ten cubits. Then said he unto me, This is the curse that goeth forth over the face of the whole earth: for every one that stealeth shall be cut off as on this side according to it; and every one that sweareth shall be cut off as on that side according to it. I will bring it forth, saith the LORD of hosts, and it shall enter into the house of the thief, and into the house of him that sweareth falsely by my name: and it shall remain in the midst of his house, and shall consume it with the timber thereof and the stones thereof.

In Isaiah 24, again, it is written that the “curse” shall devour the earth, and make it desolate, for it is the will of the LORD of hosts.

The land shall be utterly emptied, and utterly spoiled: for the LORD hath spoken this word… The earth also is defiled under the inhabitants thereof; because they have transgressed the laws, changed the ordinance, broken the everlasting covenant. Therefore hath the curse devoured the earth, and they that dwell therein are desolate: therefore the inhabitants of the earth are burned, and few men left.

I think, these passages about the whole earth are hyperbole and they speak to all of the lands of Mystery Babylon, the spiritual harlot who sits upon many waters and has military bases and command centres across the globe. But it might be that certain parts of the planet that are aligned to Mystery Babylon are to be burned as well.

For sure, those who steal from God and those who swear falsely by God’s name (ref. Zechariah 5:4) must be the self-professed Christians of Mystery Babylon – they who pretend to do God’s work in the land of “confusion” (ref. Isaiah 24:10). So, continental Babylon, at least, must completely burn, and this will happen on the day of the seventh trumpet and vial. Still, it cannot be ruled out that other parts of the world, perhaps specific installations or even individual cities, are not to burn as well, and even burn beforehand.

Precisely which parts of the world are to burn and when is something that only God knows.

In due time, Russia, and others, will simply do what they feel they must do. This is a matter between the LORD of hosts and those who wield “the weapons of his indignation” (ref. Isaiah 13:5).

It is very interesting that Vladimir Putin has now described the west as “Satanic” (ref. 9). During his speech about the annexation, Putin brought up the spread by the west of same sex marriage and transgenderism, including the brainwashing of young children on this matter, often behind the backs of parents. This unnatural and also economically perverse social agenda, designed to diminish the population of a nation and thus its prosperity, is something from Satan, the source of all evil and suffering.

As for the process of weeding out the wicked through war in these last days, which is something I previously brought up, this will take a while. The conflict between Ethiopia and Tigray, for instance, carries on, and sometimes one side seems to be winning, and other times the other side.

My sense is that Russia must become fiercer and more ruthless in its approach to war. The same goes for China, when its turn comes. In this war, the gloves are to come off. Victory will be realised only when the enemy loses its capacity to fight. That means, everyone who takes up arms for Satan must be killed.

Later on, God will loose four angels from the river Euphrates for precisely this reason.

By the way, did you notice the ferocity of hurricane Ian?

After that, hurricane Ian gained in strength and headed towards the USA, making landfall first in Lee County, Florida, and then again in Charleston, South Carolina (ref. 11), before continuing further.

About Lee, Ian: that might be a coincidence, or not.

Russia, and the east, are not only fighting for themselves but also for the world.

Let me remind that this world is God’s creation. Satan, the adversary of God, is trying to spoil it. So, to save the world, all who are with Satan must be defeated and even destroyed.

Those among the enemy who survive this unfolding world wide war, which is the winepress of the wrath of God, will not survive the saints of God.

After Armageddon, the fight will turn into one of a hunt (ref. Jeremiah 16:16).

2. Reuters (30 September 2022), “Kremlin says any attack on annexed territory will be an attack on Russia”, reuters.com

4. Raghu Malhotra (1 October 2022), “Who is behind the Nord Stream pipeline leakages, and who gains from it?”, indianexpress.com

5. “We will bring an end to it: Joe Biden warns Putin about Nord Stream 2”, youtube.com/watch?v=B8BygV2kZBU

11. Sky News (1 October 2022), “Hurricane Ian: 77 killed and many unaccounted for after one of strongest, costliest storms in US history”, news.sky.com