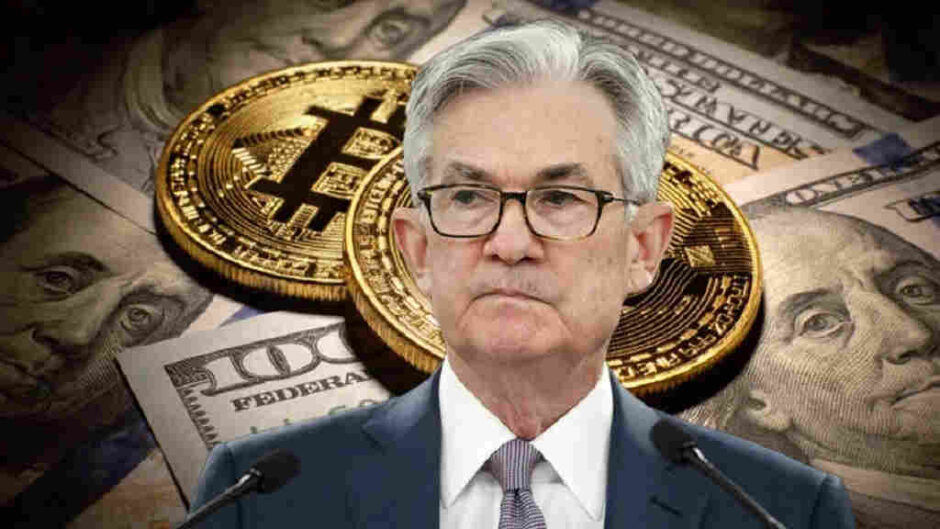 At a conference on the tokenisation of finance organised by Banque de France, US Federal Reserve Chair Jerome Powell revealed that the USA is working on a digital currency complete with self-hosted wallets, all of which should come, in approximately two years (ref. 1). Two years mean the time of the next US presidential election, 2024: the election that might put into office the False Prophet of Revelation, otherwise known as the beast with two horns like a lamb, and also the man of sin.

And I beheld another beast coming up out of the earth; and he had two horns like a lamb, and he spake as a dragon.

It is not clear from scripture that “the king of Babylon” (ref. Jeremiah 50:43) must be the False Prophet, but it is clear that the False Prophet will be the one in Mystery Babylon who will bring about the mark of the beast (ref. Revelation 13:11-17).

Some pastors have argued that the KJV’s translation of the Greek preposition επι “epi” is wrong. Most modern translations, including the ESV and the NIV, read “on” rather than “in”. But actually, “epi” can mean either “on” or “in”, or even “at”, “over”, “against”, etc. For instance, in Matthew 24:5, “epi” reads “in”, in the KJV, the ESV and the NIV.

For many shall come in [επι, epi] my name, saying, I am Christ; and shall deceive many.

If it turns out the mark is put “on” the right hand, then it will be some kind mark such as a tattoo or the like that identifies the person.

Amazon’s contactless payment system, for example, which is already available in the USA, scans the palm print of a customer’s hand (ref. 2).

If it turns out the mark is put “in” the right hand, then it will be a microchip of some kind.

Walletmor’s payment system, for example, which is already available in the USA, requires a microchip, about the size of a grain of rice, to be inserted into a customer’s right hand (ref. 3).

The idea of a self-hosted wallet, an innovation in DeFi, which is short for decentralised finance, further suggests that something as sophisticated as a microchip will be required as opposed to a simple mark on the skin. The purpose of a digital wallet is to keep one’s digital keys secure, safe from a server-side hack. If it were to be simply a mark, which is essentially just one key or a single password, then it would not be a decentralised system at all. With one key or a single password, all of the actual digital money would have to be stored on a server, making it susceptible to a server-side break-in.

Though many proponents of DeFi want future cryptocurrencies to be fully peer-to-peer, independent of government scrutiny, the remarks of Jerome Powell suggest that the forthcoming US digital dollar will not be like that. Powell and the Feds want a US Central Bank Digital Currency to not be anonymous (ref. 4).

So, you can imagine, when someone that has taken the mark of the beast refuses to worship the image of the beast, he or she can be sanctioned and left penniless.

Earlier I brought up Amazon’s and Walletmor’s current payment systems. Essentially, those are similar to debit or credit cards. They are a means of payment rather than a currency. I am sure, the mark of the beast will be a digital currency, and not only that, it will be the currency of Mystery Babylon, the country of the False Prophet.

To compel all consumers and vendors to take the mark, they must destroy the current US dollar through hyperinflation. If the US dollar is not made utterly worthless, many Americans will continue to buy and sell using the US dollar rather than the new digital currency.

For Satan, the whole point of the mark of the beast is to force people to worship the beast, and consequently cause their souls to be damned in the lake of fire.

And the third angel followed them, saying with a loud voice, If any man worship the beast and his image, and receive his mark in [epi] his forhead, or in [epi] his hand, The same shall drink of the wine of the wrath of God, which is poured out without mixture into the cup of his indignation; and he shall be tormented with fire and brimstone in the presence of the holy angels, and in the presence of the Lamb: And the smoke of their torment ascendeth up for ever and ever: and they have no rest day nor night, who worship the beast and his image, and whosoever receiveth the mark of his name.

For that matter, it is worth noticing that Powell wants cryptocurrencies to be regulated and restricted (ref. 5), so that effectively there will be only one currency in the USA. You might think, this is a normal thing for a central bank, because a central bank should want complete control of the money supply, in order to do monetary policy. But actually, many countries today welcome the use of cryptocurrencies in their economies as they do any other foreign currency. Babylon, by contrast, will want every citizen to buy and sell using exclusively the new digital currency that will be the mark of the beast.

Concerning online purchases, and imports and exports, my recommendation is to avoid all American goods and services when the mark of the beast happens. It cannot be for nothing that Revelation 13 reads, the False Prophet will cause “the earth and them that dwell therein” to worship the first beast.

And I beheld another beast coming up out of the earth; and he had two horns like a lamb, and he spake as a dragon. And he exerciseth all the power of the first beast before him, and causeth the earth and them that dwell therein to worship the first beast, whose deadly wound was healed.

Finally, in Revelation 13:18, it is prophesied that, in these last days, at least one person is to have understanding, and that this is someone that has identified the beast, i.e. the Assyrian, through the name of the beast and the number 666.

Here is wisdom. Let him that hath undertanding count the number of the beast: for it is the number of a man; and his number is Six hundred threescore and six.

I have identified the beast, Abdullah Kardash, 666. That means I have understanding.

Those Americans that continue to insist on a pre-tribulation rapture will take the mark of the beast when it comes because they assume Christians are not to be here at the time of the tribulation.

To be saved, you must know what is the tribulation (ref. Matthew 24:29-31), and you must realise that the United States of America has fallen to rebellious angels (ref. Revelation 18:2) and consequently become profoundly evil.

When Mystery Babylon ultimately burns and is made utterly desolate, true Christians will “rejoice” (ref. Revelation 18:20).

3. “Give me a five: Hand implant allows you to pay as you go”, youtube.com/watch?v=v2mmw4J38eo