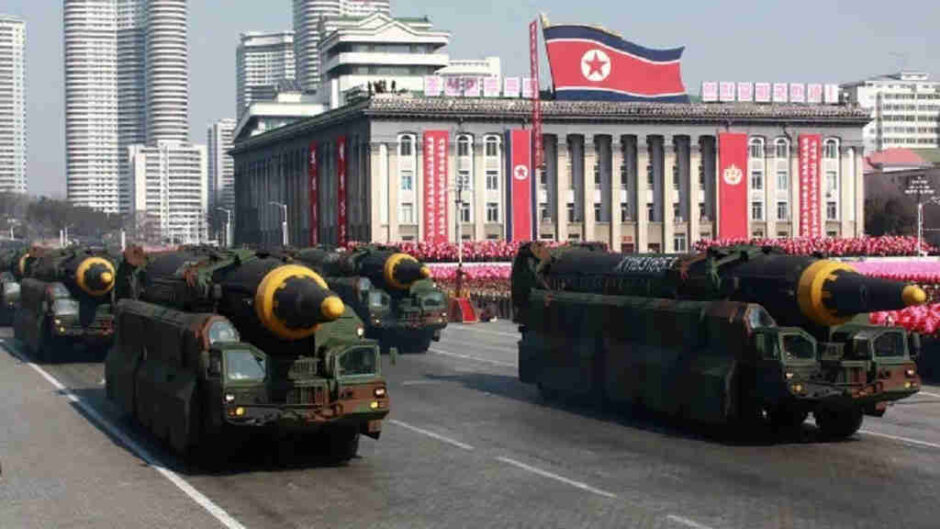 Three days ago, North Korea, or the Democratic People’s Republic of Korea, DPRK, test-fired what was most likely the Hwasong-12, a mobile intermediate ranged ballistic missile. That missile flew across the airspace of Japan between the islands of Hokkaido and Honshu, flying a distance of 4600 km, before hitting some part of the Pacific Ocean (ref. 1).

This was not only a shot across the bow for Japan, but also for the USA. 4600 km means the nuclear-capable Hwasong-12 can hit the US island of Guam, which is about 3400 km from North Korea.

North Korea’s 4600 km test was provoked by a joint naval exercise off the coast of the Korean peninsula that involved the USA, South Korea and Japan (ref. 2), which in turn was a response to two earlier North Korean test fires of other missiles, which in turn happened around the time of US Vice President Kamala Harris’s visit to South Korea and the United Nations command post at the DMZ (ref. 3).

The launch of the Hyunmoo-2 at an airforce base near Gangneung failed when the missile’s propellant caught on fire. That fire caused the missile to crash and burn shortly after takeoff, though the warhead did not explode (ref. 4).

Was the failure of South Korea’s Hyunmoo-2 due to an accident or some kind of incompetence? Or did something supernatural happen?

The Bible prophesies that in these last days when the war is underway and Babylon tries to fire its nuclear missiles against her enemies – that is to say, when Babylon mounts up to heaven to fortify the height of her strength – “spoilers” from the LORD will come and break “every one” of Babylon’s bows.

Though Babylon should mount up to heaven, and though she should fortify the height of her strength, yet from me shall spoilers come unto her, saith the LORD. A sound of a cry cometh from Babylon, and great destruction from the land of the Chaldeans: Because the LORD hath spoiled Babylon, and destroyed out of her the great voice; when her waves do roar like great waters, a noise of their voice is uttered: Because the spoiler is come upon her, even upon Babylon, and her mighty men are taken, every one of their bows is broken: for the LORD God of recompenses shall surely requite.

I have previously explained that angels, on both sides, can fly fast enough to put something into the air-intake of a fighter jet to mess up the engine of the jet, and also fast enough to knock off course a ballistic missile warhead.

Maybe angels can also spoil the rocket engine or propellant of a ballistic missile.

Satan was once known as “the prince of the power of the air” (ref. Ephesians 2:2). This probably explains why Babylon is militarily obsessed with air power. Dominating the air and bombing the ground from the air is a big thing for the USA.

Yet, it is doubtful that Satan and his lot will be able to dominate the air for the entire duration of the war when the world war is underway. I say this because there are more angels than there are demons. The Bible explains that, in these last days, angels outnumber demons two to one (ref. Revelation 12:4).

Take the F-35 Joint Strike Fighter, for example. That fifth-generation stealth combat plane is riddled with faults. South Korea, for one, has noticed that their F-35s have been operationally unready 234 times over 18 months because of malfunctions, and on 62 occasions the jet could fly but could not complete its combat mission (ref. 5). There is also the point that these so-called stealth planes are not actually stealthy anymore. I think, by now both China and Russia have the technology to see the F-35, and even the F-22 and the B-2, enough to acquire a firing solution and shoot them down. This is because God is the LORD of hosts, and so, as the saying goes, every battle is won before it is ever fought.

At any rate, once the seventh seal is opened, the sky will be darkened and filled with volcanic ash, which will be to the advantage of the army of horsemen.

Now notice, South Korea flies a flag with a yin-yang, a symbol of eastern mysticism, which suggests that darkness and light, or evil and good, are equal.

North Korea, by contrast, flies a flag with an upright five-pointed star. There are also five-pointed stars on China’s flag, arranged to symbolise the sun. When Jesus Christ returns, he will come from the direction of the rising of the sun.

For as the lightning cometh out of the east, and shineth even unto the west; so shall also the coming of the Son of man be.

I have made the point that good and evil are not equal. It should be obvious that good is stronger because God is almighty.

The latest news about the Korean peninsula is that North Korea has fired several more ballistic missiles (ref. 6), despite South Korea’s failure at Gangneung.

You see, in this unfolding world war, when the enemy is finally brought to its knees, having realised its military inferiority, there is to be no mercy. Around the time of Armageddon, the enemies of God are to be more or less finished off, once and for all.

Right now, of course, everyone is arrogant, because it is essentially the whole world against Russia and China and a few others including North Korea.

And we know that we are of God, and the whole world lieth in wickedness.

Being “the children of pride” (ref. Job 41:34), they will surely become even more arrogant when the Antichrist forms his empire and begins his supernatural onslaught.

Beware, everyone that sides with the Antichrist and worships the Antichrist will have his or her name blotted out (ref. Revelation 3:5) of the Lamb’s book of life, which means that person’s soul will burn in the lake of fire at the time of the second death.

And all that dwell upon the earth shall worship him, whose names are not written in the book of life of the Lamb slain from the foundation of the world.

At the height of their power in these last days, they who are with Satan will boast, “Who is able to make war with him?”

But actually they are very weak, and they merely think that they are strong.

Beat your plowshares into swords, and your pruninghooks into spears: let the weak say I am strong.

For against them, and with the kings of the east, and also with the elect of Israel, is God.

So, make no mistake, for Satan and all who are on his side, this is the time of the end: these are their last days.