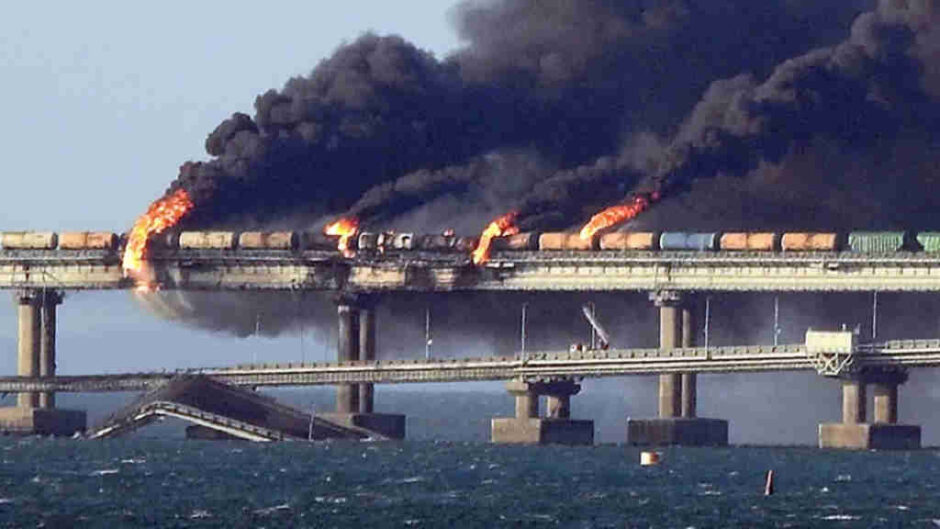 Two days ago, a section of the Kerch Strait Bridge linking the Crimean Peninsula to Russia was damaged by the explosion of a truck bomb (ref. 1). Completed in 2018 and inaugurated with great fanfare by Vladimir Putin himself, the parallel road and rail bridge is vital to Crimea economically and militarily. The bomb exploded precisely as a freight train carrying fuel was passing by. The bomb killed three, and collapsed a section of the bridge, and set alight the nearby railway. Ukraine celebrated the attack, which by the way happened a day after Putin’s 70th birthday.

Russia has since restored some road and rail traffic.

A preliminary investigation suggests the attack was a covert operation that involved Ukraine’s SBU and also other foreign intelligence agencies (ref. 2). The truck in question had travelled through Bulgaria, Georgia, Armenia, North Ossetia and Russia’s Krasnodar region, before reaching the bridge. At this stage, it is not known whether the driver was on a suicide mission or whether the vehicle had been rigged to explode when it did.

Whichever the case, Moscow blames Kyiv, describing it as “an act of terrorism” (ref. 3). In his public address, Putin also brought up, among other things, the car bomb assassination in Moscow of Darya Dugina, the daughter of a pro-Kremlin figure, the attempted attacks against the Russian nuclear power plant at Kursk, and the series of undersea explosions that severed the Nord Stream pipelines.

In response to the attack on the Kerch Strait Bridge, today, Russia carried out several precision missile strikes against Ukrainian military targets, communications and energy facilities (ref. 4) in Kyiv, Lviv, Ternopil, Zaporizhzhia and Dnipro, some places far away from the frontline.

Putin also went on to warn that if attacks were to continue against Russian territory and infrastructure, the response from Russia would be harsh.

In other news, Belarus has ordered some of its troops to deploy with Russian forces (ref. 5), north of Ukraine. Apparently, arrangements began two days ago, soon after the attack on Russia’s Kerch Strait Bridge.

Both the entry of Belarus into the war and Russia’s long-range strikes are prophetic. Belarus must be one of Russia’s “young ones”.

She dwelleth and abideth on the rock, upon the crag of the rock, and the strong place. From thence she seeketh the prey, and her eyes behold afar off. Her young ones also suck up blood: and where the slain are, there is she.

Russia’s long-range strikes, for the time being with conventional warheads, also remind me of the longbow of Crécy and Poitiers and Agincourt.

Over the last few weeks, there has been a lot of mocking and arrogant boasting on social media and also on mainstream media in the west that Russia is losing, and that Russia does not have the military power to prevail in war against Ukraine, let alone in a World War 3 against the USA and her allies. At one point, the tag “#RussiaIsLosing” began to trend on Twitter.

During the Hundred Years War, the knights and men-at-arms that stood opposed to the longbow were just as arrogant and confident that their extensive training and their expensive and elaborate armour would give them victory. Yet, battle after battle, they were cut down and defeated. The longbowmen even waged a “chevauchée”, a style of warfare that focused not necessarily on taking territory and holding it, but on burning and razing to the ground entire towns and villages, in order to reduce the productive capacity of the enemy, thereby diminishing the enemy’s ability to fight.

Contrary to the spin of some Bible prophecy pundits, the rider of the white horse of the apocalypse with a “bow” (ref. Revelation 6:2) is, firstly, not the Antichrist but a Christian because of his “crown” of victory, and, secondly, he does have arrows for his bow. Because he has arrows, when the time comes, he will make bright and fire his arrows. Indeed, such is the will of God.

Make bright the arrows; gather the shields: the LORD hath raised up the spirit of the kings of the Medes: for his device is against Babylon, to destroy it…

Against him that bendeth let the archer bend his bow, and against him that lifteth himself up in his brigandine: and spare ye not her young men; destroy ye utterly all her host [army].

It is noteworthy that on the night of 8 October 2022 – the day the Kerch Strait Bridge was covertly attacked by intelligence agencies hostile to Russia – reportedly, Russia paraded two mobile MIRV-equipped ICBMs past the US embassy in Moscow (ref. 6).

In time, this world will see just how much military power Russia has.

2. ABC (11 October 2022), “The Kerch Bridge linking Russia and Crimea in Ukraine collapsed after an explosion over the weekend. This is what we know”, abc.net.au

3. “Putin: Response will be harsh if attacks continue against Russia”, youtube.com/watch?v=qs3iffgtK9M

6. “Maybe the last warning to the US, Russia parades 2 ICBMs in front of the US embassy in Moscow”, youtube.com/watch?v=BdoEG3n-MfM