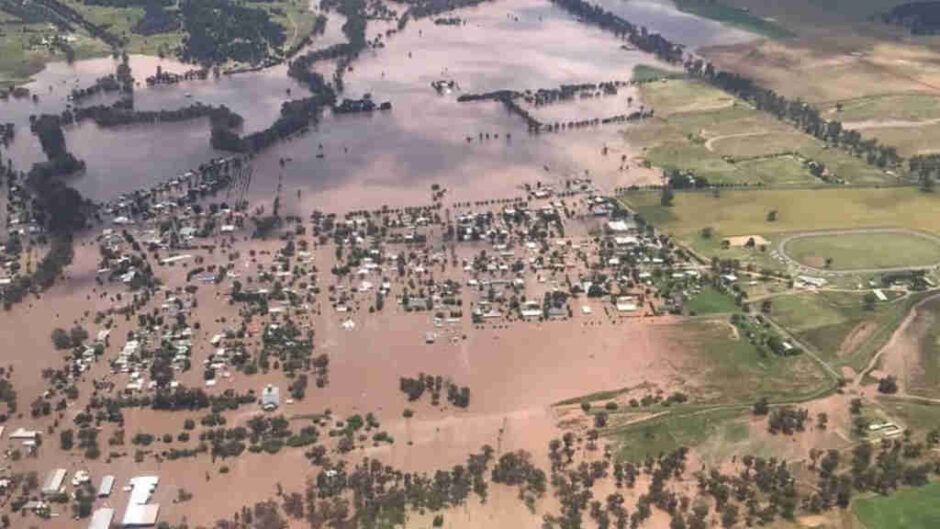 In the last few days, there has been a tremendous amount of rain across much of the entire continent of Australia, as incredible as that sounds. Meteorologists say, it was a 3500km line of thunderstorms (ref. 1), stretching from Tasmania to Queensland, combined with several microbursts (ref. 2).

In Victoria, the sudden heavy rain brought about flash flooding that inundated several homes, fell many trees, and turned some roads into rivers (ref. 3). Worst hit was Mornington Peninsula, where there are beaches. About sand, more later. There, a storm cell astonishingly produced a month’s rain in just 6 hours (ref. 4).

In South Australia, thunderstorms with winds up to 106 kms per hour, accompanied by 423000 recorded lightning strikes, knocked down trees and power lines, causing the largest outage event since 2016 (ref. 5, 6). Some 163000 homes and businesses were without electricity at some point.

They were literally in the dark, in Adelaide, once known as Australia’s “city of churches”. The Bible prophesies that in the last days, there will be darkness, both literal and metaphorical.

For, behold, the darkness shall cover the earth, and gross darkness the people: but the LORD shall arise upon thee, and his glory shall be seen upon thee.

In Northern Territory, in the normally arid town of Alice Springs, which is near several deserts mind you and also America’s Pine Gap, an incredibly “violent” but brief storm cut power to over 4000 homes, uprooted thousands of trees, and damaged fences and carports and even some buildings (ref. 7).

Even parts of Queensland and Tasmania saw a deluge of rain, and also giant hail.

But the brunt of the massive weather system was seen in Victoria and New South Wales.

In New South Wales – the state of Lachlan Macquarie, Australia’s first Freemason – in the small town of Eugowra, population approximately 600, flash flooding because of the rain damaged almost every house in town. What is more, the waves of water caused several houses to break off from their foundations and float to another location (ref. 8, 9, 10). Even houses atop concrete were ripped from their foundations (ref. 9). There were also twisters in Eugowra that day (ref. 9).

The devastation happened very fast. It was like an inland tsunami.

More than 100 individuals found themselves stranded and had to be airlifted to safety by rescue helicopters.

“There’s been nothing like this in the history of Eugowra” (ref. 8).

Now, there is something important to be said about all this because, apparently, “Eugowra” literally means in Australian aboriginal “the place where the sand washes down the hill”. Not only that, the small town of Eugowra sits on Mandagery Creek, a tributary of the Lachlan River, which was named after Lachlan Macquarie.

This metaphor of a house that is built upon sand that falls when the flood comes was a teaching of the Son of man Jesus Christ when he was here.

The “rock” in the metaphor that provides strength and stability for the house is the “chief corner stone”, Jesus Christ himself. Therefore, a foundation of “sand” for a house, or a nation or a people, must be the opposite, Satan.

I believe, this event was a supernatural message, to Australia if not the world.

Since Matthew 7:24-27 begins with the conjunctive adverb “therefore”, the subject that prompted the metaphor of the house built upon sand must be “false prophets” and “ravening wolves” in sheep’s clothing, as opposed to the Word of God and actual sheep of the good shepherd Jesus Christ.

Beware of false prophets, which come to you in sheep’s clothing, but inwardly they are ravening wolves. Ye shall know them by their fruits… A good tree cannot bring forth evil fruit, neither can a corrupt tree bring forth good fruit.

Today, there are many around, across the world, proclaiming to speak for Jesus Christ when in fact they do not. Some even falsely claim to receive dreams and visions from the Holy Spirit. The fruits of these self-professed prophets will become apparent to all, only after the day of the LORD.

Every tree that bringeth not forth good fruit is hewn down, and cast into the fire.

To be clear, a false prophet is someone who speaks the predictions and teachings of demons, the enemy.

In theory, a demon is able to predict the future because he can time travel. This explains the phenomena, among non-Christians, of seers, crystal balls and fortune tellers.

In Deuteronomy 18:10-14, a person that foresees the future through demons is described as an “observer of times”, someone equivalent to a “witch” or a “consulter with familiar spirits”.

There shall not be found among you any one that maketh his son or his daughter to pass through the fire, or that useth divination,, or an observer of times, or an enchanter, or a witch, Or a charmer, or a consulter with familiar spirits, or a wizard, or a necromancer. For all that do these things are an abomination unto the LORD: and because of these abominations the LORD thy God doth drive them out from before thee. Thou shalt be perfect with the LORD thy God. For these nations, which thou shalt possess, hearkened unto observers of times, and unto diviners: but as for thee, the LORD thy God hath not suffered thee so to do. The LORD thy God will raise up unto thee a Prophet from the midst of thee, of thy brethren, like unto me [Moses]; unto him ye shall hearken;

Notice, the opposite of an observer of times is a true prophet of God.

With a false prophet, you can never know whether something that is being predicted is true or false. A false prophet might say some things that come true and at the same time other things that are false, all in an attempt to deceive.

Once more, here is the metaphor, this time the version in Luke.

And why call ye me, Lord, Lord, and do not the things which I say? Whosoever cometh to me, and heareth my sayings, and doeth them, I will shew you to whom he is like: He is like a man which built an house, and digged deep, and laid the foundation on a rock: and when the flood arose, the stream beat vehemently upon that house, and could not shake it: for it was founded upon a rock. But he that heareth, and doeth not, is like a man that without a foundation built an house upon the earth; against which the stream did beat vehemently, and immediately it fell; and the ruin of that house was great.

So, to not fall in these last days, one must hear the sayings of Jesus Christ, and do them.

… as the days of Noe [Noah and the flood] were, so shall also the coming of the Son of man be.

Now, notice, this means, it is possible for someone, even today, to come towards Jesus Christ and hear his sayings.

First of all, Jesus Christ continues to speak through his Word, a correct translation of the Bible.

Seek ye out of the book of the LORD, and read: no one of these shall fail…

Furthermore, in these last days, at the appointed time, there will be two actual prophets of God, the two witnesses of Jesus Christ (ref. Revelation 11:3, Zechariah 4:14), who will preach the gospel to every nation, and kindred, and tongue, and people (ref. Revelation 14:6, 11:9).

Further yet, once God’s marvellous work concerning Israel is almost over, the elect or chosen of the Jews (rather than Christians) will directly receive the Holy Spirit (ref. Zechariah 12:10, Joel 2:28-29).

And ye shall know that I am in the midst of Israel, and that I am the LORD your God, and none else: and my people [Jews] shall never be ashamed. And it shall come to pass afterward, that I will pour out my spirit upon all flesh [Jews]; and your sons and your daughters shall prophesy, your old men shall dream dreams, your young men shall see visions: And also upon the servants and upon the handmaids in those days will I pour out my spirit.

This will make them likewise “prophets” of God, holy. It will be these individuals whom Babylon and also the Antichrist will try to kill during the tribulation.

And in her [Mystery Babylon] was found the blood of prophets, and of saints, and of all that were slain upon the earth.

Further still, even before the two witnesses and the outpouring of the Holy Spirit to God’s elect, there is some light in this world because of the work of certain Christians, the saints. The Bible explains that every “saint” is someone who comes to understand the mystery of the will of God (ref. Ephesians 1:9).

Having made known unto us the mystery of his will…

Regrettably, there are some who have been trying to challenge and undermine me for several years now. Remember, I was the first to say that this is the time of the end, and provide proof.

If a person does not know who is on which side, then that person is already lost, wandering off track.

And he spake a parable unto them, Can the blind lead the blind? shall they not both fall into the ditch?

If a house, or a people, cannot tell darkness from light, then it will make serious mistakes and be cursed for doing so.

Ye are the light of the world. A city that is set on a hill cannot be hid. Neither do men light a candle, and put it under a bushel, but on a candlestick; and it giveth light unto all that are in the house. Let your light so shine before men, that they may see your good works, and glorify your Father which is in heaven.

When the two witnesses arrive, those who aspire to be Christian must fall into line, or else risk falling out and falling down.

It is not an idea to challenge the two olive trees, also known as the “two candlesticks” (ref. Revelation 11:4).

For these two true prophets of God will have the power to “smite” the earth with all manner of weather events “as often as they will” (ref. Revelation 11:6).

8. Catherine Naylor (15 November 2022), “Eugowra man, 91, was trapped inside his house as it floated away”, brisbanetimes.com.au

9. Natassia Chrysanthos, Catherine Naylor and Rhett Wyman (15 November 2022), “Next thing I knew the water had lifted the house: Eugowra homes reduced to mud and concrete”, smh.com.au