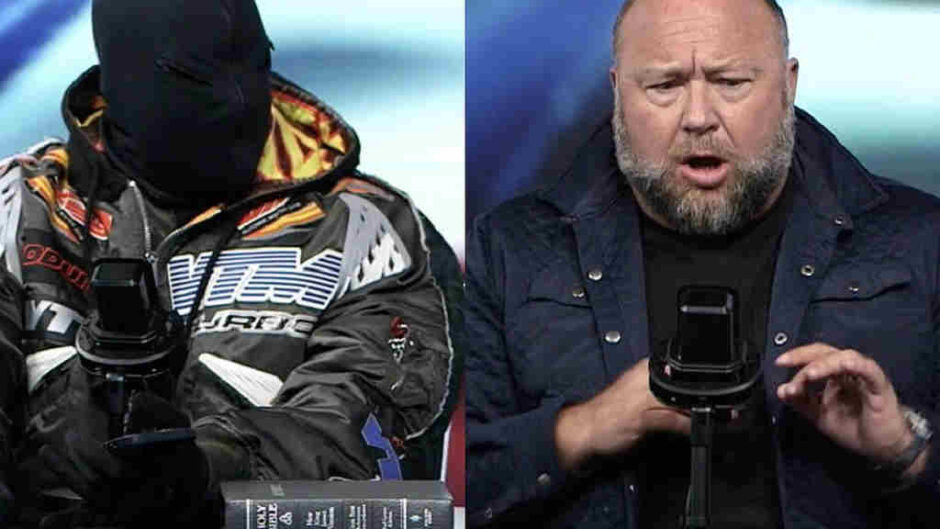 During an interview on Infowars with conspiracy theorist and sensationalist Alex Jones, and while wearing a race jacket and a black head covering, perhaps signifying that he is the coming “Black One”, American rapper and celebrity idol Kanye West said, “I see good things about Hitler” and “I like Hitler” (ref. 1, 2).

Also sitting there at the interview that day on Infowars was Holocaust denier Nick Fuentes, an outspoken white supremacist who is on Kanye’s 2024 campaign team, along with Milo Yiannopoulos, who once tried to do an Oscar Wilde re pederasty, an idea conceived by the polytheistic gods of ancient Greece.

Kanye’s emerging far-right politics and anti-semitism should be no surprise because his 2013 blasphemous album “Yeezus” features a metal song called “Black Skinhead”.

On top of that, a month ago, after an incident on Instagram, Kanye tweeted that he would go “death con 3 on Jewish people”, when he wakes up (ref. 4), a play on the US military expression “Defcon” for “Defence Condition”.

All this speaks volumes, if you know enough about Bible prophecy.

And when the dragon saw that he was cast unto the earth, he persecuted the woman [the Jews] which brought forth the man child [the Son of man Jesus Christ].

It is also very interesting that on the table in front of Kanye that day at Infowars, while he spoke all these things, was a Bible, specifically a New King James Version Bible (as opposed to a KJV 1611 or 1769).

And I beheld another beast [the False Prophet] coming up out of the earth; and he had two horns like a lamb, and he spake as a dragon. And he exerciseth all the power of the first beast [the Assyrian] before him, and causeth the earth and them which dwell therein to worship the first beast, whose deadly wound was healed.

I remember, Donald Trump once held up a Bible of some kind in his hand for a photo op, to signify his Christianness or something.

Speaking of Trump, a week or so ago, Kanye approached Trump to ask him to be his 2024 running mate (ref. 5). Trump did not like the idea, and would rather run for the top job himself.

I think, Kanye approaching Trump was more a kiss-the-ring type thing than anything else. This was not unlike his inviting Marilyn Manson of “Antichrist Superstar” fame to join him in his Sunday Service.

Kanye, who once did an opera about Nebuchadnezzar, has compared himself to that king of Babylon. The Bible describes Mystery Babylon, or “Babylon the great” (ref. Revelation 18:2), Satan’s eighth kingdom (ref. Revelation 17:11), as “the daughter of Babylon” (ref. Jeremiah 51:33), and furthermore it describes the king of Babylon at this time of tribulation and reaping as “Nebuchadrezzar”.

For thus saith the LORD of hosts, the God of Israel; The daughter of Babylon is like a threshingfloor, it is time to thresh her [the tribulation]: yet a little while, and the time of her harvest [the reaping] shall come. Nebuchadrezzar the king of Babylon hath devoured me, he hath crushed me, he hath made me an empty vessel, he hath swallowed me up like a dragon, he hath filled his belly with my delicates, he hath cast me out. The violence done to me and to my flesh be upon Babylon, shall the inhabitant of Zion say; and my blood upon the inhabitants of Chaldea, shall Jerusalem say.

And he cried mightily with a strong voice, saying, Babylon the great is fallen, is fallen, and is become the habitation of devils… And I heard another voice from heaven, saying, Come out of her, my people [the Word of God speaking to the Jews], that ye be not partakers of her sins, and that ye receive not of her plagues… And in her was found the blood of the prophets [Jews], and of the saints [Jews and Christians], and of all that were slain upon the earth.

It must be mind-boggling to think that after all this Nazism and anti-semitism, Kanye West can still win an election for the office of the president of the United States of America.

What he is doing seems to be a far cry from standard politicking.

I guess, if he is the chosen one of Satan, and when the time is right, they will simply give it to him. If it happens, it goes to show that in the United States of America, public opinion and even votes do not matter.