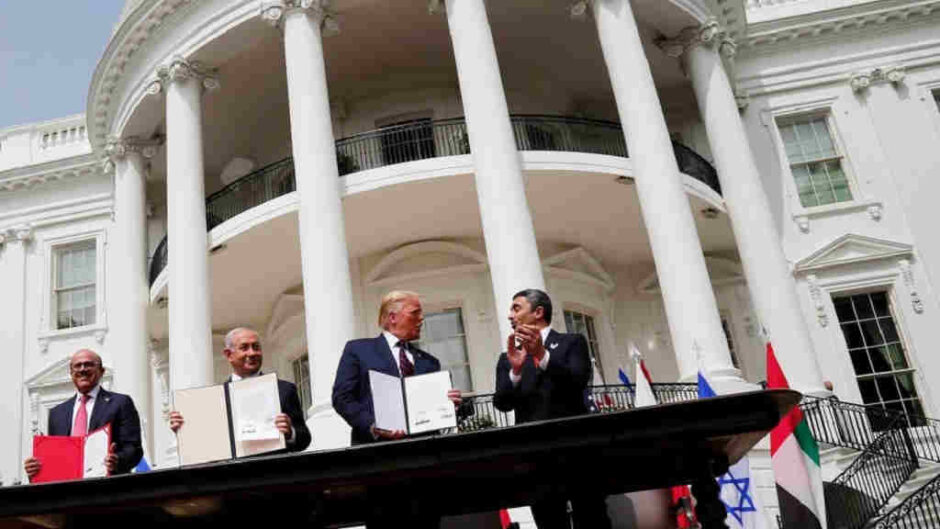 The covenant with many in Daniel 9:27 is one aspect of Bible prophecy that I am still not sure about. When I first started, I got this spectacularly wrong. In 2013, from March 20 to 23, US President Barack Obama visited Israel. The trip was given the codename “Unbreakable Alliance” in English, and “Brit Amim” in Hebrew, meaning “a covenant of peoples” or “an alliance of nations” (ref. 1). Several American pastors suggested this was Daniel 9:27’s “covenant with many”. For this reason, I subsequently assumed the midpoint of the seven years would be in September 2016. Furthermore, it follows from this that the end of the seven years, the day of the LORD, would be in March 2020. With hindsight, all of that was wrong. As of now, there is not yet a temple of God and the daily sacrifice has not yet started. For that matter, the two witnesses have not yet appeared. So, “Brit Amim” was not the covenant of many.

Now, what about the Abraham Accords? On 15 September 2020, despite the position of the religion of Islam, the United Arab Emirates and Bahrain, both Arab and Muslim-majority countries, formally recognised the state of Israel and established diplomatic relations with it. This agreement or covenant to normalise relations, labelled the Abraham Accords, was arranged by US President Donald Trump. In December 2020, Morocco, another Muslim country, also normalised relations with Israel, and in return, the USA recognised Morocco’s claim over Western Sahara. In January 2021, Sudan joined the Accords as well, in exchange for funding from the World Bank and for the removal of Sudan from the US list of countries that support terrorism. More recently, there is talk that Saudi Arabia might follow suit. So, the Abraham Accords are a kind of covenant that involve many.

And after threescore and two weeks shall Messiah be cut off, but not for himself: and the people of the prince that shall come shall destroy the city and the sanctuary; and the end thereof shall be with a flood, and unto the end of the war desolations are determined. And he shall confirm the covenant with many for one week: and in the midst of the week he shall cause the sacrifice and the oblation to cease, and for the overspreading of abominations he shall make it desolate, even until the consummation, and that determined shall be poured upon the desolate.

First of all, Messiah “cut off” must mean the crucifixion of the Son of man Jesus Christ.

After that, in 70 AD, the Romans under Titus, son of Vespasian, besieged the city of Jerusalem and burnt down the temple, “the sanctuary”.

So, “the people of the prince that shall come” that shall destroy the city and the sanctuary were the Romans led by Titus. Even though Titus and Vespasian were quite different from Nero, Rome at the time of Vespasian was arguably still an empire of Satan, namely the sixth. Certainly, at the time of John of Patmos, Rome was Satanic.

And there are seven kings: five are fallen, and one is [Rome in the day of John of Patmos], and the other is not yet come; and when he cometh, he must continue a short space [the Fourth Beast in the last days]. And the beast that was, and is not, even he is the eighth [Mystery Babylon in the last days], and is of the seven, and goeth into perdition.

Alternatively, “the people of the prince” is explained by the presence of Syrians in the legions of Titus that destroyed the city and the sanctuary.

At any rate, “the prince that shall come” must be Satan. In biblical nomenclature, a “prince” is an angel (ref. Daniel 12:1, Daniel 10:13, etc). In the last days, this evil angel and the angels that are with him are cast out of heaven and into the earth. This explains the expression “the prince that shall come”. That is to say, “The devil is come down unto you having great wrath”.

Therefore rejoice, ye heavens, and ye that dwell in them. Woe to the inhabiters of the earth and of the sea! for the devil is come down unto you, having great wrath, because he knoweth that he hath but a short time. And when the dragon saw that he was cast unto the earth, he persecuted the woman [Jews] which brought forth the man child [Jesus].

Next, the prince that shall come is the “he” that shall confirm the covenant with many for one week. The word “confirm” is sometimes translated “make”.

All of that is to say, the angel Satan is the one who establishes and later breaks the covenant with many.

To be clear, if the prophesied covenant with many and the Abraham Accords are one and the same, that means Donald Trump, the president of the United States of America in 2020, did this thing for Satan. The Abraham Accords were undoubtedly the brainchild of the Trump administration. Moreover, Israel, the UAE and Bahrain were invited to the White House of Donald Trump on 15 September 2020 to officially sign the deal.

Returning to scripture, the prophecy is that Satan shall confirm the covenant with many for one week, which many Bible scholars say equals seven years. And then in the middle of the week, or after three and a half years, the same “he”, Satan, shall cause the daily sacrifice and the oblation to cease, and beyond that, he shall spread “abominations” that will result in “desolation”.

In Daniel 11:31, it is explained that an army on the part of the Assyrian or the Antichrist shall polute the sanctuary, take away the daily sacrifice, and place the abomination that makes desolate.

And arms shall stand on his [the Assyrian, the king of the north, Daniel 11:29] part, and they shall pollute the sanctuary of strength, and shall take away the daily sacrifice, and they shall place the abomination that maketh desolate.

The abomination of desolation is also mentioned in Matthew 24 and Mark 13.

But when ye shall see the abomination of desolation, spoken of by Daniel the prophet, standing where it ought not, (let him that readeth understand,) then let them that be in Judaea flee to the mountains:

In Mark 13, the grammar of the original Greek for “standing”, hestekota, suggests that the abomination of desolation is not a thing like a statue of Zeus but rather a person. If a person, he must be none other than the False Prophet of Mystery Babylon, the “man of sin” (ref. 2 Thessalonians 2:3-9), the one with “two horns like a lamb” that speaks as a dragon (ref. Revelation 13:11).

… that man of sin be revealed, the son of perdition; Who opposeth and exalteth himself above all that is called God, or that is worshipped; so that he as God sitteth in the temple of God, shewing himself that he is God.

The False Prophet is an “abomination”, because even though he proclaims to be a Christian, he actually worships and serves Satan (ref. 2 Thessalonians 2:8-9).

Even him, whose coming is after the working of Satan with all power and signs and lying wonders,

Notice in Deuteronomy 7, a graven image of a rebellious god, an idol, is described as an “abomination”.

Concerning “desolation”, since the False Prophet will push the mark of the beast in Babylon (ref. Revelation 13:11-18), and since Babylon will betray Israel (ref. Jeremiah 51:35-36), Babylon’s punishment from God is that she will be made desolate by her enemies on the day of the LORD. This will be a desolation that will make consummation pointless. What I mean is, radiation from nuclear fallout will make females infertile and everyone cancerous.

And he shall confirm the covenant with many for one week: and in the midst of the week he shall cause the sacrifice and the oblation to cease, and for the overspreading of abominations [mark of the beast] he shall make it desolate, even until the consummation [radiation], and that determined shall be poured upon the desolate.

… the LORD of hosts mustereth the host of the battle. They come from a far country, from the end of heaven, even the LORD, and the weapons of his indignation [nuclear weapons], to destroy the whole land. Howl ye; for the day of the LORD is at hand; and it shall come as a destruction from the Almighty… Behold, the day of the LORD cometh, cruel both with wrath and fierce anger, to lay the land desolate: and he shall destroy the sinners thereof out of it.

All this explains the expression “the abomination of desolation”.

The abomination of desolation signals the start of the final three and a half years.

And from the time that the daily sacrifice shall be taken away, and the abomination that maketh desolate set up, there shall be a thousand two hundred and ninety days.

Despite the Greek grammar of Mark 13:14, it is still possible for the abomination of desolation to be an idol or a statue of some kind. An argument could be made from the words “place” in Daniel 11:31 and “set up” in Daniel 12:11 that the abomination is a thing and not a person.

Every pious Jew knows the history of the Maccabees. After all, Hannukah celebrates the recovery of the temple of God from the Selucian emperor Antiochus IV Epiphanes, who put in there a statue of the Greek god Zeus.

Recently, there was news that Maccabean-era arrowheads were discovered in Israel at the Tower of David (ref. 2). That same day, it was also reported that a rare silver half shekel, circa 69 AD, was discovered at the Ophel site, an area south of the Temple Mount (ref. 3). Two archaeological finds that bring to mind aspects of Daniel 9:26-27.

If the deal known as the Abraham Accords is the prophesied covenant with many, that means the year 2024, which is 3.5 years from September 2020, will be significant.

2024 happens to also be the year of the next US presidential election, an election that could see the False Prophet, the son of perdition, assume the position of king of Babylon (ref. Jeremiah 51:34).

For thus saith the LORD of hosts, the God of Israel; the daughter of Babylon is like a threshingfloor, it is time to thresh her [tribulation]: yet a little while, and the time of her harvest [Christians in Mystery Babylon] shall come. Nebuchadrezzar the king of Babylon hath devoured me… The violence done to me and to my flesh be upon Babylon, shall the inhabitant of Zion say; and my blood upon the inhabitants of Chaldea shall Jerusalem say.

Time will tell whether the agreement called the Abraham Accords is the prophesied covenant with many.