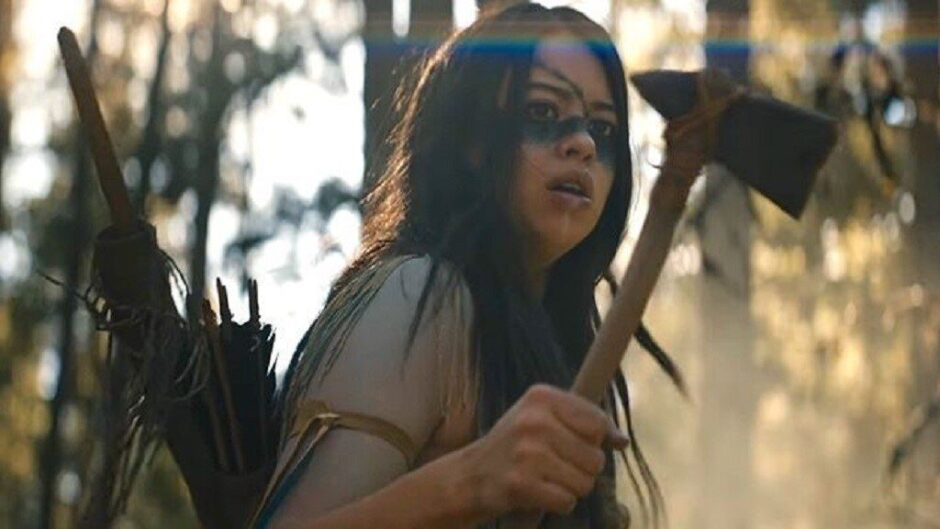 A demon is an evil spirit, one of the angels of the host of heaven that has chosen to side with Satan in rebellion against God. The human eye cannot see a demon, and a demon needs neither food nor sleep. When a demon and a human clash, it is like “iron” against “clay” (ref. Daniel 2:43).

A demon can be likened to the invisible and technologically advanced alien, called Predator – a seemingly invincible warrior when compared to the female protagonist in the movie Prey (2022). Despite his iron to her clay, as it were, at some point, she realises that she can kill it, and therefore ultimately she is the hunter and he is the prey.

This brings me to a verse in Zephaniah where God describes himself as a hunter that will prey on the evil that infests the world.

I said, Surely thou wilt fear me, thou wilt receive instruction; so their dwelling should not be cut off, howsoever I punished them: but they rose early, and corrupted all their doings. Therefore wait ye upon me, saith the LORD, until the day that I rise up to the prey: for my determination is to gather the nations, that I may assemble the kingdoms, to pour upon them mine indignation, even all my fierce anger: for all the earth shall be devoured with the fire of my jealousy.

God will do this himself.

But I will send a fire upon Moab, and it shall devour the palaces of Kerioth: and Moab shall die with tumult, with shouting, and with the sound of the trumpet: And I will cut off the judge from the midst thereof, and will slay [kill] all the princes [fallen angels] thereof with him, saith the LORD.

God will also do this through his “saints”, the “soldiers of Christ” predestined by God, and part of the “body of Christ”, and also the “bride of Christ”.

Do ye not know that the saints shall judge the world?… Know ye not that we shall judge angels?…

Furthermore, the angels of God will also be involved, at least initially within the borders of the holy land.

The Son of man shall send forth his angels, and they shall gather out of his kingdom all things that offend, and them which do iniquity. And shall cast them into a furnace of fire: there shall be wailing and gnashing of teeth.

The Bible prophesies in Revelation and Daniel that in these last days, the Devil and his lot – both his angels and his servants – will make war against the “saints”.

And it was given unto him [the Antichrist] to make war with the saints, and to overcome them…

From the point of view of the saints, it is a tribulation, in other words, a test of faith and loyalty.

During the tribulation, the saints will be, as it were, prey for the Devil.

In the movie, Prey for the Devil (2022), for a while it is not altogether clear to the audience who is the hunter and who is the prey in this battle between good and evil, a point that is repeated in Prey (2022), and also in The Hunt (2020).

The metaphor of the bride of Christ is why many of the protagonists of these sorts of movies that are against the Devil and his side are female.

Another point made by the movie Prey for the Devil (2022) is that an exorcism is essentially a prayer to God for help. When a priest performs the rite of exorcism, an angel of God comes down from heaven and chases away the demon. The priest himself has no power against the demon. The apostles and early Christians did have power after Pentecost (ref. Luke 10:19), but not priests and pastors nowadays.

Now, another thing to be said is that when an angel fights a demon, though one can dominate and arrest the other, neither can actually kill the other.

Then said he unto me, Fear not, Daniel: for from the first day that thou didst set thine heart to understand, and to chasten thyself before thy God, thy words were heard, and I am come for thy words. But the prince [demon] of the kingdom of Persia withstood me one and twenty days: but, lo, Michael, one of the chief princes, came to help me; and I remained there with the kings of Persia.

And I saw an angel come down from heaven, having the key of the bottomless pit and a great chain in his hand. And he laid hold of the dragon, that old serpent, which is the Devil, and Satan, and bound him a thousand years.

This fact, and the fact that demons are seemingly immortal and invincible when compared to humans, has made many a demon arrogant and overly confident.

Generally, demons have no fear of angels. This is why sometimes a demon and an angel can be in the same room, trying to influence a person one way or the other.

But demons do fear God.

Thou believest that there is one God; thou doest well: the devils also believe, and tremble.

This is because God, the creator of all things, even angels, can un-create a demon.

There is also God the Father who is more powerful than the Son.

I may be wrong but I doubt that angels can even see God the Father, let alone comprehend his power.

No man hath seen God at any time; the only begotten Son, which is in the bosom of the Father, he hath declared him.

[Jesus Christ] Who is the image of the invisible God [God the Father], the firstborn of every creature: For by him were all things created, that are in heaven, and that are in earth, visible and invisible [incl. angels], whether they be thrones, or dominions, or principalities, powers: all things were created by him, and for him: And he is before all things, and by him all things consist.

So, if Jesus Christ is one with the Father, and the Holy Spirit (ref. 1 John 5:7), and Jesus Christ can kill a demon (“slay”, ref. Amos 2:3), then it stands to reason that anyone given the Holy Spirit will be able to do the same. I am speaking of the “saints”, born-again with wings as the bride of Christ.

And he that overcometh, and keepeth my works unto the end, to him will I give power over the nations: And he shall rule them with a rod of iron; as the vessels of a potter shall they be broken into shivers: even as I received of my Father. And I will give him the morning star [the Holy Spirit].

Previously, I had thought that the saints would only hunt the human servants of Satan such as witches and Satanists – kill them and send their souls to the prison of hell, to be destroyed in the lake of fire. Now, I understand that demons are also prey. This is my latest discovery. Granted, the Devil is off limits because of Gog and Magog over a thousand years from now, but all others on his side are fair game.

Some of the demons know about the future which is why they speak about all this in various movies. Remember, a demon can inspire a scriptwriter. Putting thoughts into one’s head is what a ministering angel is supposed to do.

In Shadow and Bone (2021), apparently they have identified somebody, one Alina Starkov, a “Sun Summoner”, who will be able to obliterate at will the winged creatures of the dark.

A saint, as an immortal “soldier of Christ” (ref. 2 Timothy 2:3), will hunt down what remains of evil on behalf of Jesus Christ, who is “the light of the world” (ref. John 8:12). This is why I finished my last post by saying, in time the wicked will come to fear all light.

The LORD killeth and maketh alive… He will keep the feet of his saints, and the wicked shall be silent in darkness…

Those considering throwing in their lot with demons should know that when this begins no demon will come to help them, because the demons themselves will be prey.

Put not your trust in princes [demons], nor in the son of man [any human], in whom there is no help.

This supernatural war between good and evil will be fought for the glory of the kingdom of God.

Of the increase of his government and peace there shall be no end, upon the throne of David, and upon his kingdom, to order it, and to establish it with judgment and with justice from henceforth even for ever. The zeal of the LORD of hosts will perform this.

By the end of the one thousand years, victory will be complete.

For he must reign, till he hath put all enemies under his feet.

After that, until the time of Gog and Magog (ref. Revelation 20:7), the world will be free from evil.